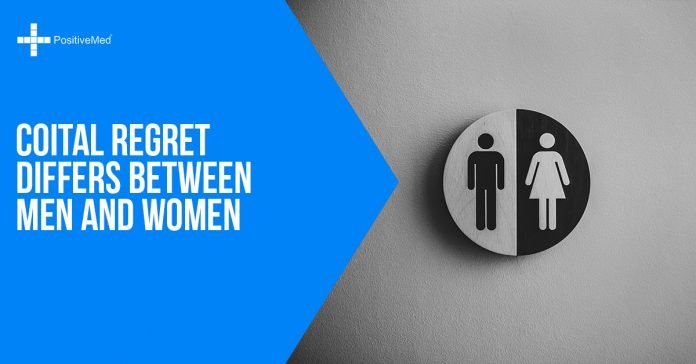 Coital Regret Differs Between Men And Women. We have all had them. There’s the one that got away and then the one who didn’t. But the real question is from whence does it all the regret regarding lovemaking and related gender differences come?

According to recent research conducted by an investigative team at the University of Texas at Austin, both men and women have regrets about lovemaking but the regrets themselves vary according to gender. The study reports for example that both genders regret making love with someone who was not really physically attractive. It also notes that 24 percent of females regret losing their virginity to the wrong man while 27 percent of males regret not taking advantage of the opportunity to have make love with a specific woman.

What else did women regret? According to the study, additional regrets for women moving too fast in terms of lovemaking and cheating on a previous partner. What did men regret?

Research reveals that men had regretted not being as intimately adventurous as they could have been when they were single and/or younger. Interestingly, gay men, lesbians, and “bi” individuals exhibited a similar pattern of regrets. Martie Haselton, a UCLA social psychology professor said in a press release:

“For men throughout evolutionary history, every missed opportunity to have [coitus] with a new partner is potentially a missed reproduc[tion] opportunity — a costly loss from an evolutionary perspective.”

For this research project, they held a trio of experiments. The first experiment included 200 subjects who evaluated hypothetical scenes wherein a person regretted pursuing another or was unable to take the opportunity to engage in coitus. Next, they were told to rate their regret on a scale of one to five.

The second one asked 395 volunteers write a list of what they thought were common regrets about lovemaking. The researcher then asked the participants to point out which common regrets they had personally experienced themselves. The last experiment was like the previous experiment but with 24,230 “hetero”, “bi”, and gay respondents.

Haselton noted that the results were the same. He stated: “For women, reproduction requires much more investment in each offspring, including nine months of pregnancy, and potentially two additional years of breastfeeding.” He added: “The consequences of casual [coitus] were so much higher for women than for men, and this is likely to have shaped emotional reactions to [lovemsking] liaisons even today.”

The research team speculated that this could very well be why other research studies have discovered a relationship between depression and having casual coitus, especially at a younger age. Assistant professor of human sciences at Ohio State, Claire Kamp Dush, stated in a press release concerning the study that casual coital relationships have the potential to actually damage young adults’ ability to nurture committed relationships at a significant moment in their own development. It could also negatively impact on an individual’s chance to truly comprehend the significations of coitus in order to rightly select the appropriate partner–in terms of evolution.

The regrets may seem somewhat antiquated or old-fashioned because we are no longer the hunter-gatherers we once were and yet the overall mindset of the reported regrets about lovemaking seems to have connections to our ancestral links. Haselton concludes: “We have reliable methods of contraception. But that doesn’t seem to have erased the [gender] differences in women’s and men’s responses, which might have a deep evolutionary history.”

So what have we learned? Perhaps our regrets regarding lovemaking are somewhat genetically embedded in us all. Perhaps men and women all have the regrets they do because that is just the way they have always behaved and thought. Perhaps both the similarities and differences–often common regardless of intimate orientation–are universal.