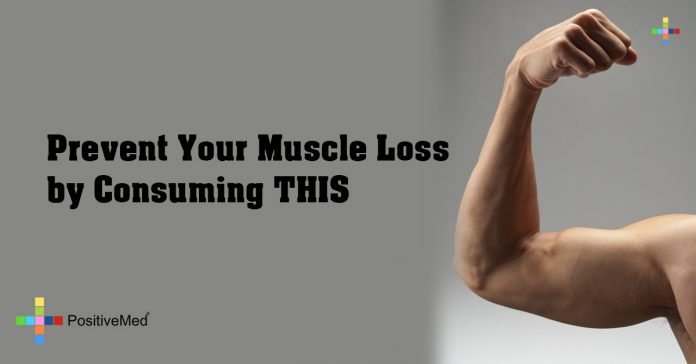 Prevent Your Muscle Loss by Consuming THIS

Muscle atrophy, also known as muscle wasting, is the phenomenon in which muscle mass, or the total amount of muscle tissue in the body, decreases. This leads to physical weakness and other problems. Muscular atrophy can happen as a result of diseases and conditions such as peripheral neuropathy, multiple sclerosis, AIDS, herniated spinal disk, kwashiorkor, axillary nerve dysfunction, Lou Gehrig’s disease, stroke, polio, anorexia, osteomalacia, mad cow disease, and type 2 diabetes. However, arguably the most common causes of muscle wasting are simply physical inactivity and aging. Physical inactivity may occur as a result of injury, illness, or living a sedentary lifestyle.

In 1997, a national government survey revealed that 40% of American adults never participate in exercise sports or other physical activities. Sedentary lifestyles are one of the biggest causes of muscle atrophy: Use it or lose it! A Danish study found that being inactive for just 2 weeks is enough for someone to lose up to 30% of their muscle strength. On average, it will take three times the length of time being inactive to regain that muscle mass. So, if you are sedentary for two weeks, it will take three weeks to go back to normal. Those who live sedentary lifestyles most likely will have some degree of muscle atrophy. This atrophy will only worsen with age unless the proper precautions are taken.

However, even those who are physically active experience a decline in muscle mass as they age. Animal studies have shown that old animals have up to 40% less muscle mass than young animals. Their actual strength levels decrease by even more. These changes are not due to the older animals being more sedentary but are actually simply caused by aging.

Another study, done on human beings, found that muscle mass decreases by almost half between the ages of 20 and 90. Some may start to notice age-related muscle atrophy as early as age 30, but most will experience it the most starting in their 40s and 50s. The medical term for this muscle loss caused by aging is sarcopenia. Although the term literally means “vanishing flesh”, it doesn’t mean there’s nothing you can do about it. In fact, with a healthy diet and an effective exercise routine, you can prevent or even reverse sarcopenia.

RELATED ARTICLE: Over 90 % of Women Have These 5 Muscle Imbalances

The second component of treating and preventing muscle loss is to eat a nutritious diet. Proteins and amino acids are arguably the most important component when it comes to supporting muscle health. Eating a diet rich in protein and amino acids will go a long way in treating and preventing muscle wasting. It’s also important to get a wide variety of vitamins and minerals. These compounds are also vitally important in ensuring the proper function of all of your bodily tissues. A couple of vitamins and minerals to pay particular attention to include vitamin C and potassium. Vitamin C is used all around your body for tissue growth and repair. This vitamin is also needed to form an important protein for your tendons and ligaments. Potassium is a mineral that, along with sodium, is very important for muscular function, allowing an electrical charge to be present in your muscle cells.

A couple of foods that are great for getting these nutrients include apples and green tomatoes. Both of these fruits include a wide variety of amino acids, including alanine, arginine, cystine, tyrosine, proline, glycine, serine, leucine, valine, tryptophan, and many more. One medium apple contains 14% DV vitamin C, and one medium green tomato contains 48% DV vitamin C. As for potassium, one medium apple contains 6% DV, and one medium green tomato contains 7% DV. These foods are also versatile, and you’ll find them easy to incorporate into recipes.