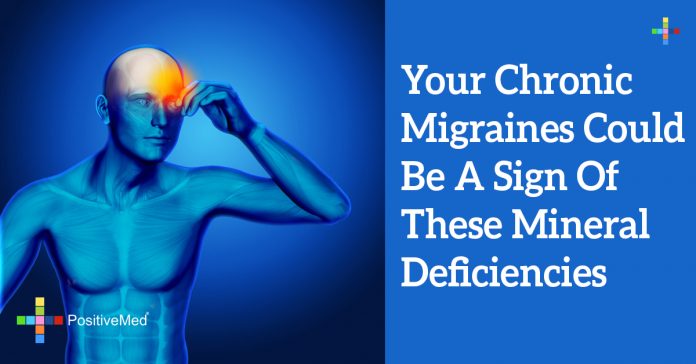 Your Chronic Migraines Could Be a Sign of THESE Mineral Deficiencies

Migraines are throbbing headaches that come back again and again, typically affecting one side of the head. They often come with nausea and at times, your vision can be disrupted by them. Different than typical headaches, migraines are intense, causing severe pain and are usually accompanied by additional symptoms, including sensitivity to light or sound, pain behind one eye or ear and seeing spots or flashing lights.

According to the American Migraine Foundation, migraine headaches affect 36 million Americans, which is about 12 percent of the population. One in four households in the U.S. includes someone who suffers from migraines. They are far more common in women than men, in fact, three times more common and about 30 percent of women get them over their lifetime.

Some types of migraines include abdominal migraines; chronic migraines; basilar-type migraines; hemiplegic migraines. There are also migraines with aura and without aura. According to The Migraine Trust, an aura is a neurological symptom that comes along with a migraine, most often as visual disturbances. Some of those disturbances include blind spots in the field of eyesight; colored spots; sparkles or stars; flashing lights before the eyes; tunnel vision; zig-zag lines; and temporary blindness.

A migraine with aura can also include numbness or tingling, pins and needles feeling in arms and legs, weakness on one side of the body, dizziness and vertigo. Sometimes, speech and hearing can be affected by these types of migraines. Other times, feelings of fear and confusion, and rarely, partial paralysis or fainting can happen. They generally happen before a headache, which may actually never come.

Migraines without an aura can last between 4-27 hours when not treated well. Patients may feel sick with nausea and may vomit or have diarrhea. Most people with migraines — 70-90 percent — have this type and they can happen as often as several times a week or as infrequently as once a year. Typical symptoms include a headache on one side of the head with a throbbing or pulsating pain that worsens while doing everyday activities.

Migraines are usually triggered by something. The Mayo Clinic describes some of them: hormonal changes in women; foods, especially salty and processed foods or skipping meals; food additives; drinks like wine and high caffeine beverages; stress; sensory stimuli like sun glare and loud sounds; changes in wake-sleep pattern; physical factors like exertion; changes in the environment including barometric pressure; and medications, such as oral contraceptives and nitroglycerin. One of the most underlooked causes of migraines is a nutritional deficiency but fortunately, this type of a migraine is easily preventable.

RELATED ARTICLE: Relieve Your Migraines Fast With This 1 Minute Technique!

Migraines Caused by Vitamin B Deficiency
B vitamins are eight different vitamins that are all part of the group of vitamins that help the body to create energy and new cells from food. Because of their critical role in maintaining the body, a migraine can occur if a person is deficient in some of the B Vitamins, particularly B2, B6, and B12. A 2004 study, “High-dose riboflavin treatment is efficacious in migraine prophylaxis,” showed that people who received a daily dose of vitamin B2, also known as riboflavin, reduced their number of migraines by half. This shows that regularly taking vitamin B2 at a dosage of at least 400 mg per day can greatly help to prevent migraines from happening before they occur. A 2009 study that was published in the “Pharmacogenetics & Genomics” journal found that B6 and B12 could reduce levels of disability and severity in patients with migraine, and the migraines themselves occurred less frequently. It is theorized that B vitamin deficiencies may cause migraines because blood vessels in the brain can become damaged or constructed without adequate nutrition.

Migraines Triggered by Vitamin D Deficiency
Vitamin D is an important nutrient responsible for helping the body to absorb other nutrients needed for proper functioning. Without enough vitamin D, you may be malnourished even though you eat enough nutrients. A 2008 study presented at the Annual Meeting of the American Headache Society revealed findings that almost 42 percent of all migraine sufferers were deficient in vitamin D. Since vitamin D has anti-inflammatory properties that cause reductions in C-reactive protein, an inflammatory mediator, it may lessen migraines by lessening inflammation in the nerves and blood vessels of the brain. Vitamin D intake has also been linked to a reduction in pain, which is called an analgesic effect. Though scientists are not certain of why vitamin D reduces pain, it still seems likely that this analgesic effect is part of the reason why people deficient in vitamin D get migraines. Therefore, vitamin D intake may be able to reduce both migraine frequency and migraine pain.

RELATED ARTICLE: Deficiency Of THIS In Your Body Increases Your Risk Of Migraines By 300%

Migraines Provoked by Heavy Metal Toxicity
Heavy metals are a group of metals that includes lead, arsenic, mercury, cadmium, and chromium. Though most human bodies can still function with trace amounts of these metals, it is hard for the body to get rid of them. Over time, levels of heavy metal tend to build up, resulting in heavy metal toxicity. One of the most common symptoms of heavy metal toxicity is migraines, and research by the Yuzunca Yil University of Turkey explores the scientific link between heavy metals and migraines. The study found that migraine patients had excessive levels of cadmium, iron, lead, and manganese. Many of these heavy metals, including lead, can cross the blood-brain barrier, so they end up causing oxidative damage to the brain, and this damage can be expressed as migraine pain.

How Can You Correct These Issues?
Fortunately, minor lifestyle and dietary changes can ensure that you avoid toxic heavy metals and absorb an adequate supply of vitamin D and the B vitamin group. To avoid heavy metals, replace any old paint or plumbing made from lead, do not eat fish tainted with mercury, and do not make contact with batteries containing cadmium. If you are concerned that you are already suffering from heavy metal toxicity, talk to your doctor about treatments that will help to remove heavy metal deposits. Vitamin D can be absorbed from the sun, and you can also get it by eating fatty fish, mushrooms, and dairy. Foods high in B vitamins include dairy products, leafy green vegetables, poultry, bananas, beef, and shellfish. These easy changes to your lifestyle can help to prevent migraines and make migraines less painful.

Migraine headaches are a serious problem that affect millions of people each year. Studies show that there is a connection between migraines and certain nutritional deficiencies, including heavy metal toxicity. In addition to traditional pain relief medicine, there are many natural ways to help prevent and relieve the severe pain of a migraine.