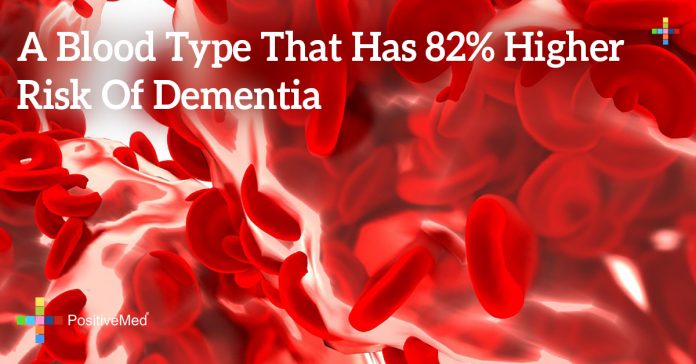 A Blood Type That Has 82% Higher Risk of Dementia

Most people only think about their blood type when they are donating or receiving blood, but your blood type can actually affect your health. Blood is divided into four types based on the antigens that exist on the surface of red blood cells, and in addition to affecting the functions of blood cells, these antigens can greatly influence health. A recent study by Dr. Mary Cushman from the University of Vermont College found that people with a certain blood type actually have a much higher risk of dementia.

What Is Dementia?
Dementia is a general term that describes several different degenerative brain conditions that occur with old age. Alzheimer’s disease and Parkinson’s disease are the most common types of dementia, but in general, dementia can be any type of condition that causes mental ability to decline. At first, the early symptoms of dementia just seem harmless, and they typically consist of occasionally forgetting an appointment or having trouble following driving directions.

However, as it progresses, cognitive function begins to decline severely. People with dementia may end up completely forgetting friends or family members, and they may even become unable to talk if the word processing centers of the brain are affected. Without a properly functioning brain, people with dementia can experience complete personality changes or lose the ability to think critically and solve problems.

What Are the Differences Between Blood Types?
Blood types are categorized based on the antigens on the surface of the blood cells. For example, blood type A means that the body accepts only type A antigens, and it will attack type B antigens. Blood type O has neither A nor B antigens, and blood type AB has both type A and type B antigens. The human body is very complex, so these antigens end up affecting many other actions within the body, including blood clotting, cholesterol, and hormone levels.

What Was Discovered in the Medical Study?
Dr. Cushman published the study in the journal, Neurology, which detailed the methods used to gather the information. The medical study examined over 30,000 test subjects who were 45 years of age or older. The subjects took tests that scored their memory and critical thinking skills, and then they were tested again on the same subjects three years later. 495 of these test subjects were revealed to have memory or thinking impairment due to dementia. After adjusting for differences in age, gender, race, and location, it was revealed that people with an AB blood type were 82 percent as likely to have dementia related impairment as people with type O blood.

RELATED ARTICLE: What Tea You Should Be Drinking Based on Your Blood Type!

Why Does Blood Type Affect Dementia Risk?
The researchers of the study suggest that there are perfectly logical reasons for the increase in stroke risk among patients with type AB blood. People with type AB blood have higher levels of clotting factor VIII, which is a protein designed to stop bleeding when blood vessels are torn. However, high levels of clotting factor VIII greatly increase the risk of blood clots that can travel to the brain and lead to a stroke. Even a temporary blockage of a blood vessel in the brain can cause a mini stroke, which may harm the brain’s ability to function over time. Due to the link between increased stroke risk and increased dementia risk, the fact that people with type AB blood have higher amounts of clotting factor VIII seems to suggest that the higher chance of blood clots is causing the higher dementia risk.

What Can You Do to Lower Your Dementia Risk?
Even if you have type AB blood, you will not necessarily get dementia in old age. Fortunately, there are many things you can do to lessen your risk and counteract your blood type. Dr. Cushman emphasizes the importance of a healthy lifestyle, and maintaining a healthy weight, lowering blood pressure, and exercising often all greatly reduce dementia risks. Avoiding toxins such as heavy metals or cigarette smoke can prevent the brain from being damaged unnecessarily. Exercising the brain through puzzles and games that require critical thinking also helps to reduce dementia risk. By having a healthy lifestyle and living in a healthy environment, individuals with AB blood types can lower their dementia risks just as easily as all other blood types can.