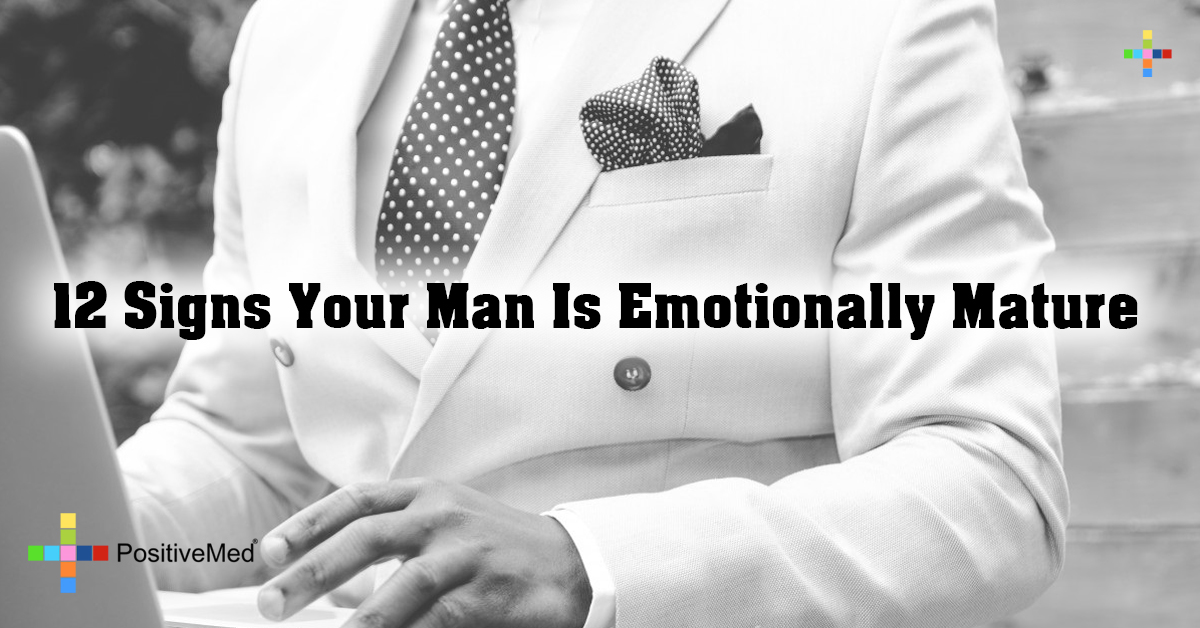 12 Signs Your Man Is Emotionally Mature

Most men take longer to mature than women and can be challenging to date if they’re emotionally immature. Women may become frustrated if they date a man who is insecure or becomes competitive, which can quickly cause the relationship to fail and suffer. To ensure that you’re dating an emotionally mature man, there are a few important signs to look for when picking out the right partner.

Men who are secure with themselves and are confident don’t become jealous of their significant other and are more apt to support them rather than compete. When you’re promoted in your career or are recognized in the community, he won’t sulk or become jealous.

Emotionally mature men are able to support themselves and maintain steady employment without having a poor work ethic. They know the direction that they want to go in with their career.

3. He Can Make Decisions Easily

Your man is emotionally mature if he can make decisions easily without having fear of moving forward in life, especially with his romantic relationship.

4. He Isn’t Afraid of the Future

Mature men embrace the future and look forward to it rather than getting stuck in the past or having fear of taking a step forward in the relationship.

5. Your Man is Direct and Honest

Mature men make it a point to remain honest with their partner without hiding details of their life or acting like a different person outside of the relationship.

RELATED ARTICLE: 10 Signs He’s a Boy Not A Man

6. He Isn’t Dating Other Women

You want to date a mature man who doesn’t have a wandering eye and is committed to remaining monogamous. Men who date multiple women at once are often not looking to settle down or remaining faithful in the future.

It can be difficult to date a man who isn’t supportive and doesn’t help you to pursue your dreams or goals in life. Look for someone who can empower you and allow you to feel capable of accomplishing your dreams.

8. Your Man Has Goals

Mature men want to succeed in both their personal and professional life, which is why they make it a point to set specific goals for themselves and accomplish them in a certain timeframe.

9. He Becomes Friends with Your Friends

According to mamiverse.com, immature men are ones who don’t take an interest in your friends and make it awkward to spend time with people that they don’t yet know. Look for a mature man who wants to get to know those who are closest to you and also become friends with them.

Emotionally mature men are confident enough to date independent women and are willing to respect boundaries that are established in the relationship. They don’t try to control you or set certain rules, but instead allow you to have freedom and remain your own person.

According to MindBodyGreen.com, mature men are more prone to being emotionally generous with their time and attitude. He doesn’t think of himself first when it comes to the sacrifices that he has to make to allow the relationship to succeed.

Mature men don’t act like they’re in high school by getting caught up in the drama of friends or with family members on a frequent basis. They’re more apt to remain silent when other people gossip and change the conversation.