PositiveMed The Positive Side of Medicine
Home health women's health Getting Pregnant After A Miscarriage: The Best Time To Try Again 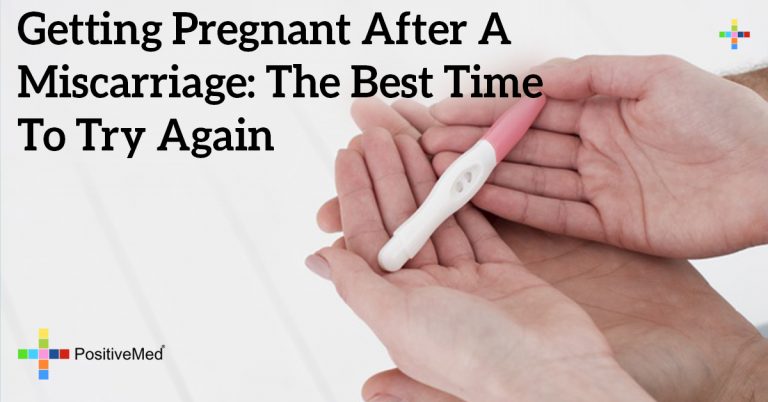 Getting Pregnant After A Miscarriage: The Best Time To Try Again

A miscarriage is a term used by the medical industry that describes the natural ending of a pregnancy in the first 20 weeks of gestation. Not only can a miscarriage create physical problems with the body, but it can also create psychological issues. Find out what to expect after a miscarriage and how to begin trying for another baby.

Physical Sides of Miscarriage
Most physical symptoms are very similar to those of a heavy period. Many women experience moderate to heavy bleeding, cramps, hormonal fluctuations and breast tenderness. Some women experience the leaking of breast milk too. Pregnancy hormones may be present for up to a month after the miscarriage, so some women experience a false positive on pregnancy tests.

Psychological Sides for Women
The psychological side for women can be extremely volatile. Many women still have pregnancy hormones present in their systems, so mood swings are common. It’s also common to experience feelings of sadness, loss, anger and sometimes even elation. Other people can make seemingly innocent comments that are extremely hurtful. Many women are told that they are “lucky” they didn’t know their child, yet the pain of a miscarriage can be as harsh as the death of a baby carried to term.

What Causes Miscarriage?
There are a huge number of factors that can cause a miscarriage. Some causes include chromosomal abnormalities, uterine abnormalities, immune issues, thyroid problems, bacterial infections, severe lifestyles and Polycystic Ovary Syndrome.

Emotions During Subsequent Pregnancies
Both parents may feel a range of emotions during subsequent pregnancies. Most parents feel joy at trying again, yet many other emotions may bubble to the surface too. Many men and women experience fear at the thought that another pregnancy could result in miscarriage. Many parents also fear sadness or guilt that they are trying again. Many people also feel anger at their partners or resentment that they don’t share in their emotions.

When is the best time for pregnancy after miscarriage?
More women who become pregnant within six months after a miscarriage have better results carrying the baby full to term. Women who miscarried to an infection may need to wait longer. After the second miscarriage, most doctors recommend waiting for up to three months to try for a third pregnancy because of the emotional loss and grief that surrounds miscarriage. Yet many doctors are suggesting that women can have successful pregnancies within shorter time periods.

How Can You Improve the Chances of a Healthy Pregnancy?
The most basic ways to improve the health of a pregnancy are to limit caffeine consumption, cut out alcohol and tobacco products, exercise no more than three times a week, eat a balanced diet, visit the doctor as soon as possible while taking supplements and reduce stress.

Talk to your doctor about what to expect before, during and after a miscarriage. You might also consider joining a support group to understand your emotions. You’re not alone, and your symptoms are not something to fear. There is plenty of support for both women and men who need help through this emotional time.