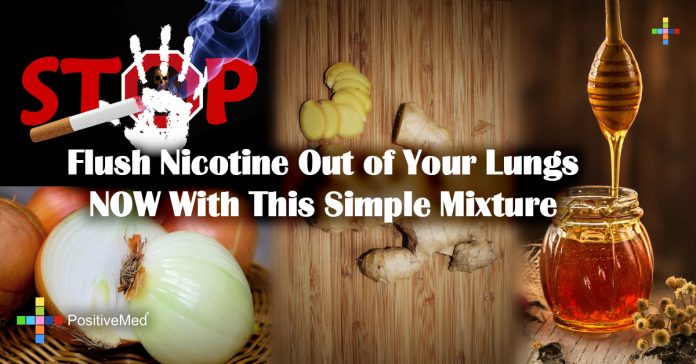 Serving as one of the first lines of defense that the body has against infection, our lungs get taken for granted. When they’re working properly, we don’t really notice that they’re there. It is only when something happens that makes it hard to breathe that we suddenly become aware of them. While outdoor air pollution certainly plays a role in the health of your lungs, the most common and most dangerous substances (simply because of their prevalence) are tar and nicotine, found mainly in cigarettes and secondhand smoke. You need to flush nicotine and tar out of your lungs to avoid the damages they may do to your lungs. With repeated exposure, these poisons will accumulate in the body and build up in the lungs, eventually turning them completely black.

Nicotine is a toxin that occurs naturally in tobacco leaves and is commonly used as an insecticide. It causes an immediate and severe rise of blood pressure by constriction of the arteries.

Tar is a black, viscous compound (think road tar) that is found on the leaves of the tobacco plant. Tar coats the delicate air sacs in the lungs, preventing them from functioning properly. With repeated exposure, these poisons accumulate in the body and build up in the lungs, eventually turning them completely black.

Tar and nicotine are directly responsible for COPD, emphysema, and lung cancer.

If you have recently quit smoking or have moved into a less polluted environment, doing a cleanse of your lungs is a must.

This recipe contains ginger and turmeric, onion and honey.

Ginger has been used for centuries in the east as a powerful antiseptic and has been shown in promising research to have anti-cancer properties. Ginger is a natural anti-inflammatory agent and also works in your body as a potent blood cleanser. It can also immediately clear a stuffy head. Eat a slice raw if you don’t believe me!

Like ginger, turmeric is a mainstay in Ayurvedic medicine. Turmeric has a synergistic effect when combined with ginger and works to clear excess mucus from the lungs and reduce overall inflammation. Turmeric is also anti-microbial and anti-viral, which is very important as the immune system becomes very compromised with reduced lung function. It, too, has been linked to cancer prevention.

A member of the Allium family, onion perfectly complements ginger and turmeric in that is also is a natural blood cleanser, possessing antibacterial and antiseptic properties. Onion also increases the body’s ability to use vitamin C. Are you noticing a trend here? All of these roots have similar healing properties, especially related to lung function and healing. But most importantly, they work together becoming much more than simply the sum of their parts. They also are unique in that each of them promotes your body’s ability to use other vitamins as well as to ward off infection.

Use only natural raw honey for this. Natural honey contains a multitude of vitamins and phytochemicals that are processed out of the cheaper pasteurized honey. Here, it serves as a sweetener, too.

Here’s how to make the ancient elixir to flush nicotine and tar out of your body:

Combine the liter of water with the onion and bring to a simmer. Add two teaspoons (approximately one inch) of grated ginger root and turmeric. Use only the fresh roots found in the produce section. Avoid the powdered forms, as they have been too long on the shelf and will have lost many of their benefits.

Let this mixture simmer for 10 minutes, then add the honey. Stir until incorporated and let cool. For a thicker mixture, simmer until reduced to desired consistency.

Take two tablespoons in the morning on an empty stomach, and again at night before bed.

This healing elixir combines the synergistic cleansing effects of all its ingredients with the natural expelling abilities of the respiratory system. Expect a very productive cough lasting a few days or even longer after beginning this treatment. This is completely natural and desirable as your body rids itself of accumulated tar and other toxins.

Although most people can take this as long as needed, please keep in mind that because ginger is a natural blood thinner, consult with your physician if you are on any prescription blood thinners of suffering from any anti-coagulation problems.