10 Signs Of Physical Attraction During The First Interaction 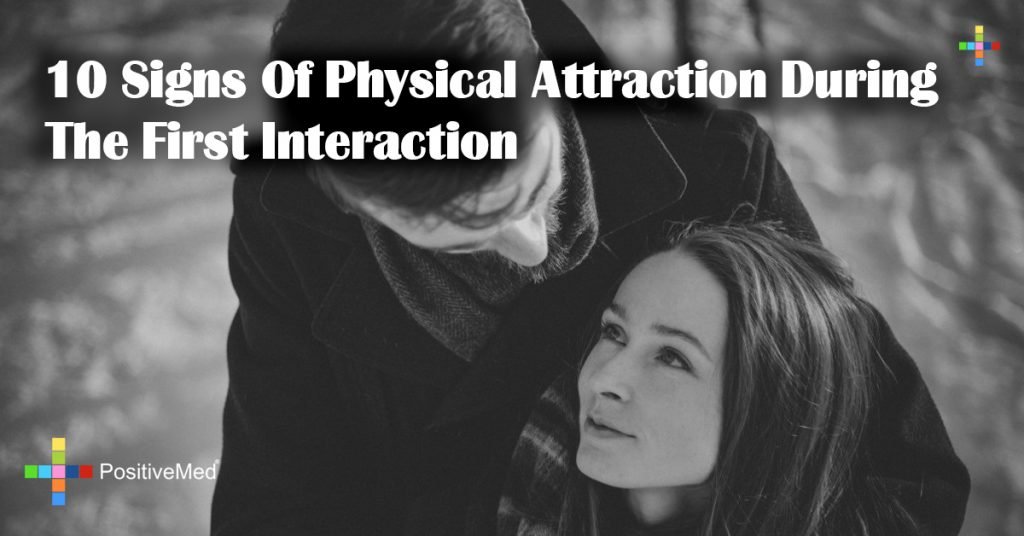 10 Signs Of Physical Attraction During The First Interaction

There are plenty of fish in the sea, and the dating world is a vast ocean. Much like the ocean, the dating world can also be polluted with a bunch of uncertainty. That’s why it’s imperative to have the ability to read body language. If you can read non-verbal cues, you have a better chance of hooking the guy or girl of your dreams!

Look Into Their Eyes

It’s always a good idea to make eye contact with somebody whether you’re meeting somebody for the first time or if you’re lifelong friends. However, the amount of eye contact a person makes with you is very telling. If they aren’t making any at all, then they’re probably trying to get away from the conversation. If they’re staring you down, then they’re likely trying to intimidate you into leaving. If there’s something the middle, then they just might be into you.

Now, I know I just told you not to stare somebody down, but it doesn’t hurt to take a quick opportunity to really look into somebody’s eyes; specifically, their pupils. A psychologist named Eckhard Hess discovered in 1975 that both men and women’s pupils involuntarily dilate whenever they’re interested in what the other person’s talking about. So if you’re engaging with somebody and the blacks of their eyes are wide as saucers, then it’s safe to say there’s a spark between you two.

Men and women both typically blink about 6-10 times per minute. I know you’re going to spend at least an hour focusing on your blinking now that you’ve read that, and I apologize in advance for driving you crazy. However, I tell you that to tell you this: count how often somebody’s blinking when they talk to you. If it’s more than the standard 6-10 times, that’s another sign that somebody is interested in you.

Smiling has long been a great way to tell if somebody is attracted to you. But sometimes, a smile can also be forced, as if to say “Get away from me.” That’s why its important to be able to tell the difference. To tell the difference, look for crow’s feet around the eyes. This older the person you’re talking to is, the easier it is to gauge this. Deeper crow’s feet also mean that the person you’re with enjoys life more!

Take a minute to gauge where the other person’s feet are. If they’re pointed away from you, that person is probably gearing up to leave (sprint?) at the first opportunity. It’s promising if a person’s feet are pointed directly toward you. That way, you know that they have no intent to go anywhere else.

I’m not suggesting that you put on your psychic hat, break out the tarot cards and examine his or her lifeline. Just look to see where the palms are pointing up. For women especially, palms that are facing upwards suggest openness and a willingness to further engage with you.

What’s That Jut of Your Trunk?

The way men and women express attraction using their torsos is radically different (of course, if you watched any stand-up comedy from the 1980s, you’re already well aware that men and women are different. When a man is interested, he tends to come forward with his core directed toward the object of his affection. Women, paradoxically, point the trunk of their body away from somebody they’re interested in while leaning away.

If a man has his head tilted at a 90-degree angle, it’s likely not because he’s trying to look up your nose. The Journal of Non-Verbal Behavior has cited this as a male-centric way of non-verbal attraction. Before you just assume, though, maybe just wipe at your nose real quick. A girl can never be too sure.

The more open a woman’s body language is, the more likely she is to be attracted to you. This is never truer than it is with her arms. Are they spread out wide? Does she constantly look like she’s preparing to wrap you in a bear hug? That’s a good sign that she’s into you. But be sure to ask permission before you hug.

A gentle touch or tap on the arm is more telling than anything else. Us social creatures value our personal space. If somebody is willing to bring their space closer to you, that’s a sure sign that there’re sparks flying.

Armed with the knowledge of knowing what to look for, now you can approach the dating world with certainty without having to outright ask. Especially since it’s definitely not attractive to ask “Do you like me?”

PrevPreviousThe Oil That Helps Reduce Your Risk of Cancer, Alzheimer’s And Diabetes
NextIf Your Skin Is Oily – Never Do These 8 ThingsNext