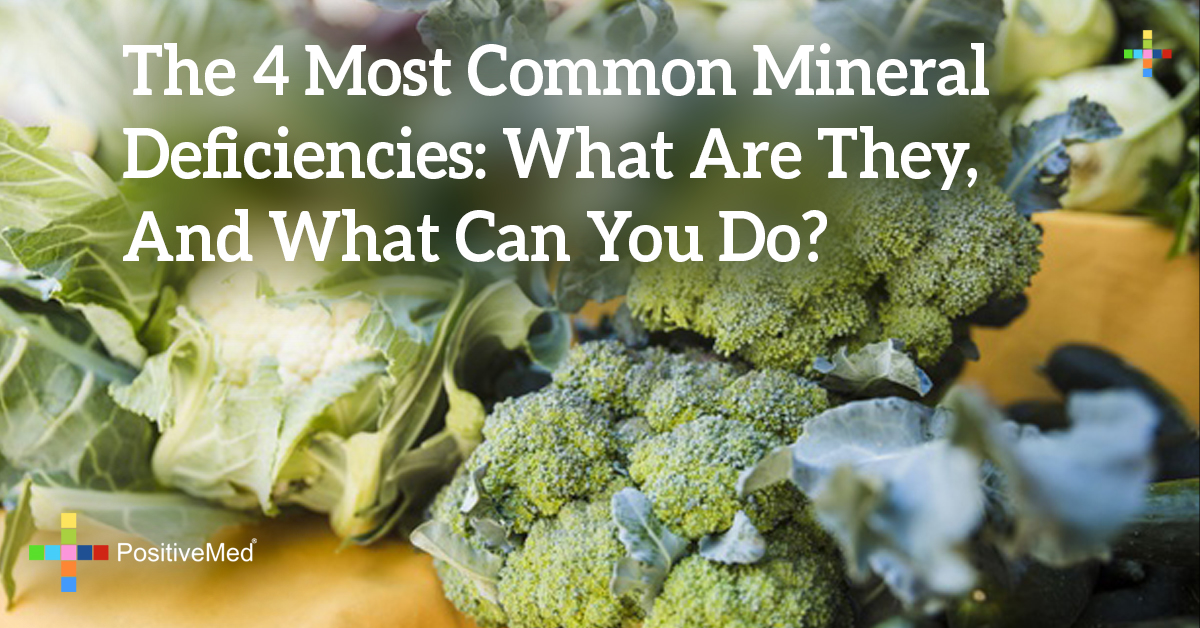 The 4 Most Common Mineral Deficiencies: What Are They, And What Can You Do?

When most people hear the word “mineral,” they imagine a rock or crystal. But minerals include a wide variety of substances we need to function, and not everything can be found in large enough quantities in the food we eat. As such, mineral deficiencies are incredibly common. The numbers of people with deficiencies are well into the billions worldwide: 1 billion people may be deficient in iron and 2 billion in zinc. What do these deficiencies mean, and how can we treat them?

Chromium Deficiencies
Chromium is required in trace amounts in humans, and it’s known how the body uses it. It is known to be involved in insulin action.

Due to this lack of information, it is not well understood how common chromium deficiency is, or how severe it can be. There have been cases of patients who had symptoms of diabetes until they received chromium supplements. Chromium is found in small amounts in most foods, with broccoli having the most.

Magnesium Deficiencies
The body uses magnesium in a variety of chemical reactions, including those involved in muscle function, blood glucose control, and blood pressure regulation. It’s also involved in calcium transport and is present in bones.

Severe magnesium deficiency is usually found in people with other health conditions and chronic alcoholism, but studies have found that almost everyone has a mild deficiency. The first symptoms include nausea, loss of appetite, and fatigue. More severe deficiencies can cause numbness, muscle cramps, seizures, personality changes, and heart spasms. Despite these scary sounding symptoms, it’s not normally dangerous in the short term, but it has been linked to other long-term conditions like cardiovascular disease and diabetes.

Magnesium is fairly common in food, but green leafy vegetables and nuts and seeds are good sources.

One of the most important minerals the body uses is iron. A majority of the iron in the body is in red blood cells, where it is involved in transferring oxygen from the lungs to the tissues. Iron is also used in a similar way to provide oxygen directly to the muscles.

RELATED ARTICLE: 9 Worst Signs Of Calcium Deficiency And What Is Your Adequate Amount Of Calcium

Iron deficiencies are usually related to poor diet, metabolic disorders, and blood loss. As such, it’s generally uncommon in first world countries, although babies, children, teenage girls, pregnant women, and premenopausal women are at risk no matter where they are. Iron deficiency is the most common cause of anemia, which can cause weak and tired feelings, decreased mental ability (leading to poor performance at school or work), and can slow down cognitive development in kids. The severity of iron deficiency isn’t well known, although it can be very dangerous in pregnant women, and can lead to the death of the mother and fetus.

Iron can be found in plenty of food, including meat, seafood, nuts, beans, vegetables, and fortified grain.

Zinc Deficiencies
Unlike the other minerals, the body does not store zinc for future use, and daily intake is important. Zinc is involved in immune function, wound healing, growth and development, and even maintaining taste and smell.

Due to the lack of zinc storage in the body, most adults are deficient in zinc, although severe zinc deficiency is rare. Zinc deficiency can cause loss of appetite, decreased immune function, hair loss, and slowed growth.

Zinc can be found in a wide variety of foods, with seafood, red meat, and poultry having the most. Because of this, vegetarians and vegans can be at a higher risk for zinc deficiency. Zinc has been shown to somehow interact with the cold virus and is potentially able to reduce the severity of symptoms, so it is readily available in supplement and lozenge form.

It is obvious that mineral deficiencies are widespread problems, and can be very severe. But even if they’re not, they can easily affect the quality of life. Before starting any new supplement, be sure to speak with your doctor. Several minerals can interact with medications, and it is possible to overdose on them.