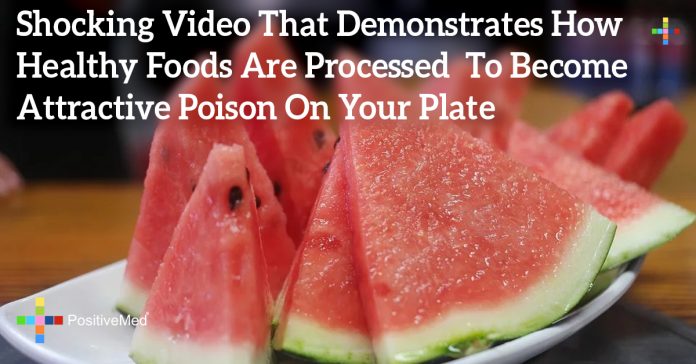 When buying fruits and vegetables, most assume they are making a healthy choice. However, this may not be the case. Due to high demand and marketing purposes, food growers and manufacturers all across the globe have turned to artificial methods.

In this video, you see workers dying vegetables to make them seem more appealing to buyers. Little do their customers know, they are being deceived and potently poisoned. At the end of the video, watermelons are seen being injected with what is believed a harmful substance that enhances the watermelon’s pigmentation and flavor.

Market vendors use these harmful tactics in order to generate more business. By artificially ripening watermelons, they are able to sell them quickly to unsuspecting buyers. According to physician Dr. Shailendra Tiwari, the mixture contains Sudan red, methanol yellow and lead chromate. All of which are linked to numerous deadly diseases.

RELATED ARTICLE: 5 Deadly Ingredients That Still Allowed By The FDA. Are You Eating Them?

Unfortunately, this isn’t the first watermelon scare. In April 2015, Chinese citizens took to the streets after a mass food poisoning. Officials encouraged people to destroy the contaminated watermelons after 17 people were hospitalized and one woman was forced to abort her baby. Illegal pesticides were linked to the incident.

As vendors continue dying and injecting produce with harmful chemicals, it is important for buyers to know the source of their food. Supermarkets normally state where produce is grown and give their suppliers name. Be especially cautious of roadside vendors who may not be reliable sources.