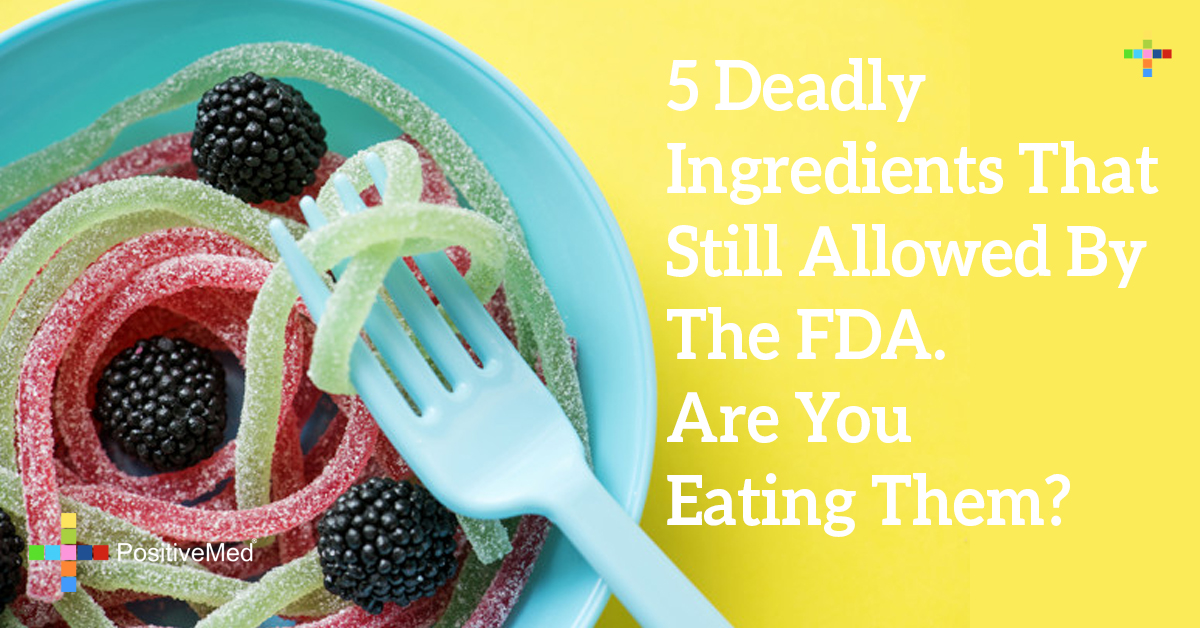 5 Deadly Ingredients That Still Allowed By The FDA. Are You Eating Them?

Most people assume that the United States Food and Drug Administration has the consumer’s best interests in mind. However, the FDA may sometimes be approving food items that have been shown to be harmful to humans. As long as a food product is not immediately killing a consumer, the FDA usually allows it to remain on the shelf. This is sometimes just an oversight, but unfortunately, it may be due to the FDA trying to please large corporations in some instances. Here are five items that the FDA has commonly approved for consumption that can be incredibly unsafe.

Partially Hydrogenated Oils
Partially hydrogenated oils are commonly used in processed baked goods and fried foods. These oils create artificial trans fats which cause levels of bad cholesterol to soar. Countless research studies have shown that consuming artificial trans fats and partially hydrogenated oils greatly increases a person’s risk for heart disease and heart attacks, so the FDA has admitted that they are not a generally recognized as safe food item anymore. However, they are still allowed in foods, and a label is allowed to claim that a product has no trans fat as long as the level is under five grams.

Sulfite Preservatives
Sulfite preservatives are a great example of a past mistake that the FDA has made. In 1982, sulfites were approved as a preservative for fresh fruits and vegetables. There was evidence that these sulfites could cause asthma attacks, but the FDA ignored this. Ultimately, it took four years and at least 12 deaths before the FDA banned it in 1986. However, sulfites are still allowed in other items besides fresh vegetables. Sulfites are not as harmful when they are in cooked products, but they can still cause allergic reactions over time.

Artificial Red Coloring
Red coloring #3 has been shown to cause cancer in animals who were exposed to it. In 1990, the FDA banned it from makeup because it was so carcinogenic. However, the canned fruit industry lobbied the government and threatened to pull FDA funding unless they allowed businesses to keep using Red #3 in foods. 20 years later, despite being proven to cause cancer, it still shows up in gum, cake mix, yogurts, and fruit cocktails.

Animal Antibiotics
Roughly 80% of all antibiotics in the world go to industrial animal farms, where animals are crowded together and given huge doses of antibiotics to prevent sickness. The antibiotics end up in meat and milk products throughout the nation. According to the CDC, all this antibiotic usage is causing antibiotic-resistant infections to mutate within humans. The FDA recommends that animal farmers stop this unethical usage of antibiotics before it is too late, but their recommendations are not legal rules.

Caramel Coloring
Caramel coloring is the most commonly used food coloring. It shows up in sodas, soy sauce, and even coffee drinks at Starbucks. In 2007, level IV caramel color was shown to contain a byproduct, 4-methylimidazole, that causes cancer. The FDA claims that food products have safe limits of 4-methylimidazole, but studies have shown that several popular soft drink companies have excessive levels of the byproduct that causes cancer.

The FDA is a valuable government agency, but all the bureaucracy means that it might take quite a while for these foods to be removed from their list of approved items. These foods might not immediately harm you as soon as you take a bite of a product that contains them. However, there is no denying that these items are incredibly hazardous if you eat them on a regular basis. Fortunately, there are many healthy, naturally created versions of these products, so you can protect your health by being mindful of what you eat and reading the ingredients within foods you buy.