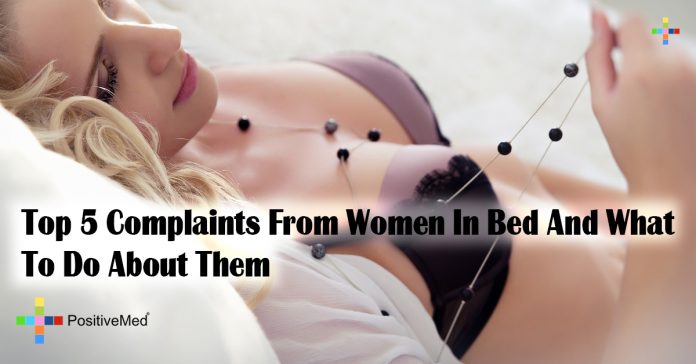 !ntimacy is the key to a long-lasting and healthy relationship. Of course relationships depend upon a variety of other factors. Common interests, having complimentary personalities, and wanting the same things out of life are all determining factors in a successful relationship. However, !ntimacy and its effect on a relationship tends to be one of the chief concerns for couples who are choosing to spend their lives together.

Women are generally raised to be less than vocal about their needs when it comes to !ntimacy, so when situations arise when their men are being inattentive or perhaps too fixed on certain acts, it can be difficult for such issues to be resolved. There are 10 major complaints from women who have experienced !ntimacy problems in their relationships. By exploring this list, both men and women can learn a thing or two about making sure their partners are happy and satisfied in bed.

1) Rushing to the Finish Line
Being excited and really into the act is great and all, but most women need more than just two minutes of fore-play before the main act. Trying to get to the “main event” too quickly is not only just impolite, for a woman it can be painful. Slowing down doesn’t make a man seem less interested, it makes him seem more like an adult.

2) Being too Rough
The amount of aggressive play that people enjoy will always vary from person to person. Just because one or two exes were ok with certain acts, doesn’t necessarily indicate all future women will be into them as well. Anything outside of the scope of a couple’s normal !ntimate activities should either be discussed before trying, or at the very least expressly asked for by the woman during the act. This prevents awkward situations during !ntimacy, and can also prevent misunderstandings. If all else fails men, just ask before you try anything you think she might object to.

3) Not Being Engaged Enough
This generally refers to being overly predictable, or doing “it” the same way every time. It can be difficult to change things up once a good rhythm has been established and all interested parties seem to be having a good time, but monotony is not fun.

4) Stop and Start
A lot of guys have trouble with finishing too quickly, and may feel like it is a good idea to rest a while in order to recuperate some control. This is a good idea, once, or maybe twice but any more than that will simply be irritating and frustrating to any woman. Instead, men might have better luck if they focus on pleasing the woman first and doing what she likes, then beginning the main event. That way, she will be satisfied more quickly and he can enjoy himself rather than spending so much energy trying to last longer.

5) Ignoring Important Anatomy
Women’s bodies are complicated, and not all women will respond to the same things. However, anatomically speaking certain areas are known to produce better sensations than others. Men should Learn about them, explore them, and ask her what feels good in order to make !ntimate moments more satisfying for everyone involved.

Healthy relationships require !ntimate moments. When couples embrace each other and take the time to communicate and build healthy bonds, even strained relationships can be repaired. By talking to one another, and discussing the !ntimacy needs of each person, couples can not only work to make their partner happier but, in turn, also improve their skills in bed. By learning how to please each other, couples forge stronger bonds that last.