PositiveMed The Positive Side of Medicine
Home health Fibromyalgia You Should Never Eat These 5 Foods Again if You Have Joint, Muscle or Fibromyalgia Pain! 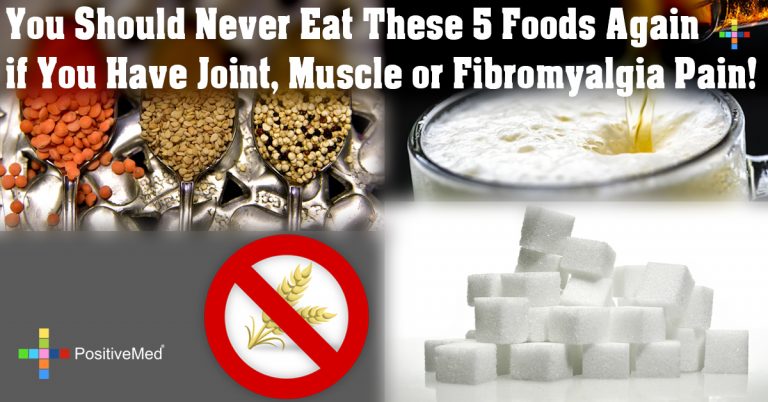 You Should Never Eat These 5 Foods Again if You Have Joint, Muscle or Fibromyalgia Pain!

Fibromyalgia is a serious health disorder marked by pain and inflammation throughout the body that includes but is not limited to symptoms like neuropathy, swollen and stiff joints, difficulty swallowing, and a generally painful response to exertion and strenuous activity.fdiv

Doctors frequently prescribe pain meds for their patients who suffer from fibromyalgia. However, most practicing physicians lack a deeper knowledge of comprehensive nutrition. In addition to exercise and plenty of sleep, here are five major foods to shun if you suffer from chronic fibromyalgia, tendonitis, joint pain, and other health concerns.I. Alcohol

First, the bad news: it’s time to bid adieu to alcohol. Well, not entirely. An occasional beer or wine indulgence isn’t a bad thing. Excessive alcohol consumption, though, is never good for anybody. Sugar is a part of alcohol’s chemical makeup. Prolonged alcohol consumption hinders the body’s natural detox processes — which is how liver disease happens — and it also impacts gut flora. Alcohol has other side effects, and alcoholism-related depression benefits nobody, especially the affected person’s loved ones. Instead, grab an unsweetened tea and pretend it’s a beer.

“Gluten-free” is now a tag that appears on packaged food for people with a heightened sensitivity to gluten. Gluten literally means glue in Latin, and it’s named so because it’s a protein-and-starch composite that gives wheat and other grains their chewy nature. Some people suffer from an autoimmune disorder called celiac disease that involves the onset of rather severe symptoms like abdominal bloating, vomiting, diarrhea, and joint pain. They’re unable to consume grains in the same way a lactose intolerant person abstains from whole milk.

How this all relates to grains is the diet of cattle. The milk the cows yield is loaded with gluten because that’s what they’re fed. A gluten-mimicking protein called casein forms after preservation and pasteurization. This spells bad news for anyone with celiac disease and, by proxy, fibromyalgia and joint disease. Unpasteurized milk is the better choice.

As mentioned, grains have gluten. A physiological intolerance to grains leads to inflammation and perhaps celiac disease. Lectins and other chemical triggers interfere with absorption of magnesium, calcium, zinc and other essential nutrients.

Sugar is a particularly volatile substance to put in the body. White sugar and high fructose corn syrup radically affect the body’s ability to maintain its immune defenses. The consensus is that inflammation originates in the gut — the nerve center of the immune system — and sugar’s damaging presence there does exactly that.

Here’s a heavy one, and the heavy is in the oil: genetically modified cooking oils. The most common vegetable oils people cook with are made from corn, soy and canola. They are also the worst cooking oils one can buy. All three, and any similar refined GMO-derived substance, have a hand in inflammatory pain. The only cooking oil to use is EVOO or Extra Virgin Olive Oil — read the labels and look for the words organic and certified.

The above foods are quite easily avoided and once they’re gone, they won’t be missed. Healthful organic foods are abundant today. Organic shopping might cost a little more, but it’s not how you steer the car, it’s the grade of fuel you put in the tank!