She Noticed $100 On Her Windshield. See What Happened When She Grabbed It! 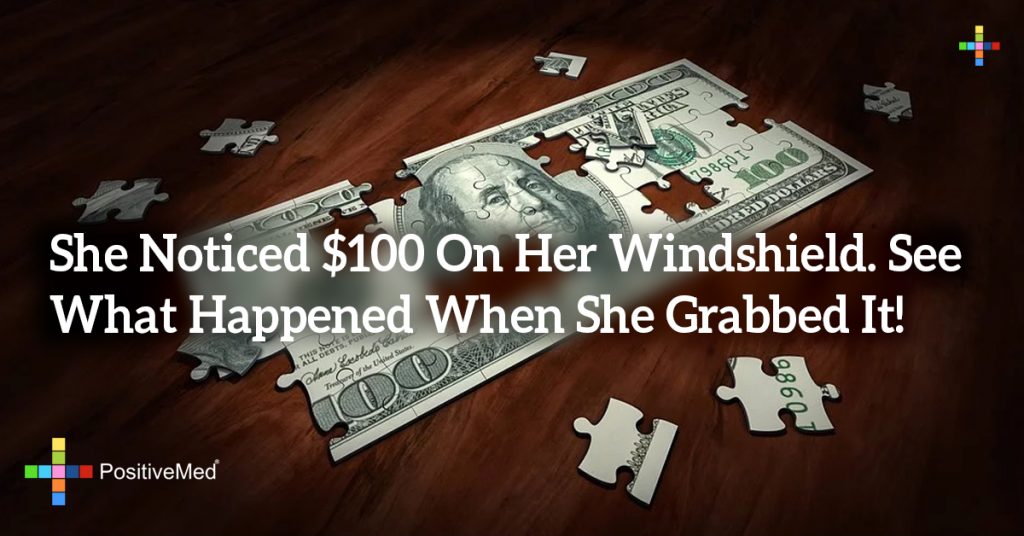 She Noticed $100 On Her Windshield. See What Happened When She Grabbed It!

A single mom was elated to find $100 under her windshield wipers during the holiday season, but the pleasant surprise quickly turned into a disheartening moment when she got out of her car to retrieve the bill and realized that it was actually a tactic employed by carjackers.

Kyri Viehman and her toddler son had met her mother at the Gravois Bluffs shopping center in Fenton, MI. Neither of the two women noticed what appeared to be a crisp $100 bill on their windshields until they’d gone their separate ways. Viehman noticed the money while driving and immediately pulled over. After getting back inside the car, however, she was disillusioned to find the bill was actually a folded note inscribed with a message.

“It read something similar to ‘Ha you thought this was real, didn’t you?'” Viehman wrote on a Facebook post that recounted the incident. When she returned home, she did some investigating online and discovered that the bill wasn’t actually just a cruel prank; it was a distraction that carjackers had been using in the area in order to scam shoppers.

Viehman decided to log online and share her story with the public. “Being a dedicated listener to the Bobby Bones Show, I thought someone was ‪#‎pimpinjoy‬ for this single mom wrestling with a crabby toddler around the holidays,” she wrote, going on to blame her “naivety” for the reason why she pulled over and got out of her car on the side of the road to retrieve what she described as “miracle money that came at the perfect time.”

Viehman’s investigating revealed that this isn’t a new occurrence. Last year, Maryland authorities warned holiday shoppers about the dangers of this fake money scam. Carjackers will plant the bill under the windshield wiper of a target’s car in a manner that isn’t able to be retrieved simply by rolling down the window and reaching out. The seconds it takes for someone to exit their vehicle is just enough time for the thieves to hop in the driver’s seat and take off. They’re certainly no fools placing their sights on holiday shoppers on their way back from the store, either, since their shiny new ride will also include a haul of recently purchased gifts.

Authorities warned Maryland citizens about the scam last season, even though it had been known by many online as an urban legend. Kyri Viehman can attest that it certainly is true. Her Facebook post closed with both expressions of disenchantment and relief. “I never thought of something like this happening around here, much less to me,” said Kyri, though she went on to add, “I am grateful I did not see the bill initially or my car with my son inside could have been taken. Someone was definitely watching over us at that moment.”

ALSO INTERESTING: THE 10 MOST STOLEN CARS IN THE UNITED STATES

Holiday shoppers should always be vigilant when heading out to fill those wish lists. The hustle and bustle of a shopping center or outlet breeds the perfect chaos needed for a carjacker or other type of scammer to swoop in and take advantage of all the yuletide cheer. Researching the latest scams reported in the area as well as always being alert and conscious of surroundings are two ways to ensure that a Christmas shopping extravaganza stays jolly.