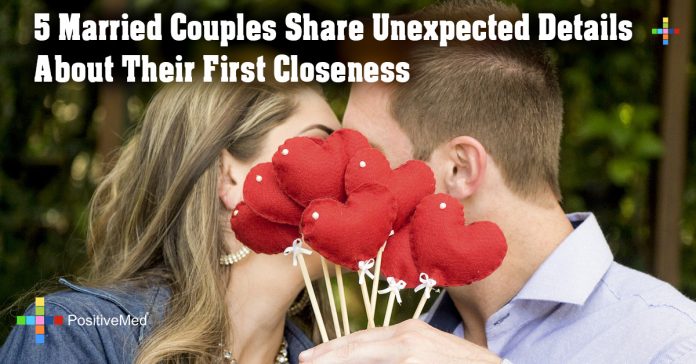 The decision about how long to wait before having a first physical contact with a partner is a hugely personal decision with many more options considered normal nowadays than in previous times. While only fifty years ago the norm was considered not to have closeness before marriage, it is slowly but surely changing in the modern day. Studies today often show over a third of women say they often have 3ex within a month after beginning a new relationship, and waiting until marriage is often actively discouraged so couples have a chance to ensure 3exual compatibility before getting married or becoming too serious.

With all of these options, it can be overwhelming for couples to choose when to take the leap. However, five couples may help make the decision a little easier. Five couples with different experiences – from one couple that had 3ex the day they met to a couple who waited until their honeymoon – tell about their experiences, what led up to the experience, and their feelings about it afterward.

Amber and Chris admit that they had 3ex on the day they met with no regrets. In a relationship of two years going strong, Amber explains that the couple met at a mutual friend’s birthday party and they went home together after. Amber suggested it may be a lame excuse to some people, but that it was a real attraction and a desire not to wait and she doesn’t regret that decision. While the frenzied decision to have 3ex upon meeting may seem crazy, it seems to have worked well for this couple. Amber says they may have less 3ex than they did the first year of the relationship, but the quality and quantity is still excellent. Meanwhile, Chris pointed out that arbitrary numbers like three dates, three weeks, or six months don’t work for every relationship or every couple and people should have 3ex when the time is right for that relationship.

RELATED ARTICLE: What Men Think If You Sleep With Them On The First Date

Unlike the first couple, Robyn and Dave have been married for 14 years and waited for first !ntercourse until their honeymoon. The decision to wait was actually Dave’s choice after having taken a vow of celibacy after a bad breakup. Robyn was a two-time widow when they met and was 45, while David was 37, hadn’t been married, but had been making love before. Naturally, Robyn admitted to wondering whether waiting for such a long time meant everything was still working properly in terms of Dave’s 3exual health, but the pair don’t regret the decision to wait in the least. Dave says his first relationships were too focused on 3ex rather than about building an physically close relationship strong enough to last through both good times and bad. The couple agrees that the decision to wait was right for them, leading to the best 3ex either had had and a great marriage.

For those who worry that an unsuccessful first attempt ensures they’ll have a bad 3ex life with that partner forever, Michelle and Brandon’s story offers hope and reassurance that that is not necessarily true. Michelle admits that the first time left something to be desired. The couple dated for four years after meeting in the military and both already had two children from previous relationships. Their first date took place at a family military function and Michelle described it as “far from romantic.” The couple had 3ex on their second date while the kids were out of the house, but it was short lived. Brandon admits he was overly excited and the 3ex was extremely brief. Luckily, that changed for the better as the couple settled into a relationship, and they have been happily married for seven years.

Perhaps one of the most traditional models for couples nowadays is to wait a few months. That’s what Kate and Rob did, dating for three months before they chose to have first $e*. Perhaps there’s a method to the madness of this new-traditional, however. Though the wait was hard for Rob, he says that it was worth it. The wait helped Kate feel more comfortable as she had just gotten out of a bad relationship not long before she and Rob got together. While she classifies their first time as being typical “good first 3ex,” she thinks that it has “definitely gotten way better,” as the couple’s relationship has developed. Both Kate and Rob are happy with the decision they made for their relationship.

Married for a year now, Treva and Robby waited until their eighth date – about two months into their relationship – before deciding to go for horizontal tango. Treva had always been a big proponent of waiting for a long time and taking a physical relationship slowly, but she felt there was something special there after seeing Robby’s patience and love while the couple volunteered as coaches during the Special Olympics. The experience was a uniting one and sealed the deal for the couple. Robby, meanwhile, suggests he knew there was something special in the relationship and wanted to avoid rushing things and messing the potentially special moment up. “I wanted it to mean everything,” Bobby says of their first time.

Becoming love- active is not only incredibly personal but is also different depending upon the specific relationship. While many psychological studies do show improved relationship success rates for relationships in which couples chose to wait, no individual relationship can be defined by a statistic. Each couple who opened up about their relationship felt they had made the right decision for themselves and the same can very well be true of anyone else’s relationship – many factors go into when the time is right beyond actual timing.