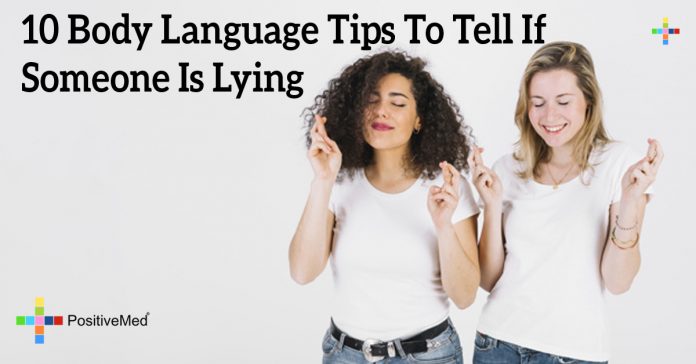 10 Body Language Tips to Tell if Someone is Lying

Honesty is always the best policy but not everyone uses it. People lie often for personal gain, cheat someone, or to simply play a prank on friends. Our body language speaks about us, and no matter how hard we try to hide the truth it will come out one day. Positive med has signs and body language indicators that can help you figure out truth from lies.

When people lie they often exhibit signs of nervousness or anxiety. Foot movement is the biggest indicator of anxiety and nervousness. Liars often shake their legs or make regular leg movements to avoid tension and run away. This can be used as a clear-cut clue to catch a liar.

This is a verbal clue displayed when people lie. When lying people often stay silent during the conversation or offer shorter responses. They also use more ums, ers, and ahs to fill in the gaps. If a person is making more speech errors its an indication of lack of truth.

If you observe someone communicating in higher pitch than normal it can be a sign of lying. Some people also maintain lower than normal pitch. High or low pitch indicates there is something off.

People often shrug their shoulders when they don’t know or agree to something. If someone is shrugging while speaking it may indicate they don’t agree with what is coming out of their own mouth.

Some sweat excessively when they lie. This abnormal sweating happens because of the adrenalin rush from anxiety and nervousness.

The thought process required to support a lie should be fast. Not everyone has fast thought processes so they change the subject to something completely different.

When people lie they often touch objects lying around to relieve stress. Some people might act as if they are more interested in the object than the conversation to avoid confrontation.

Studies have found that when people lie, they often rub their nose. It’s a scientific observation, experts believe the adrenaline rush opens the capillaries of the nose making it itchy. Some people also cover their mouth and eyes while lying, this is an uncommon observation.

Lying puts stress on our body and the biggest indicator of body stress is a dry mouth. In order to rectify the dry mouth, liars are often observed licking their lips often.
Unless the liar very staunchly believes in his/her lie, the above mentioned points should easily help you in spotting a liar.

10 Body Language Tips to Tell if Someone is Lying
By PositiveMed-Team
Edited By Stephanie Dawson
[Last Updated: February 7th 2014]