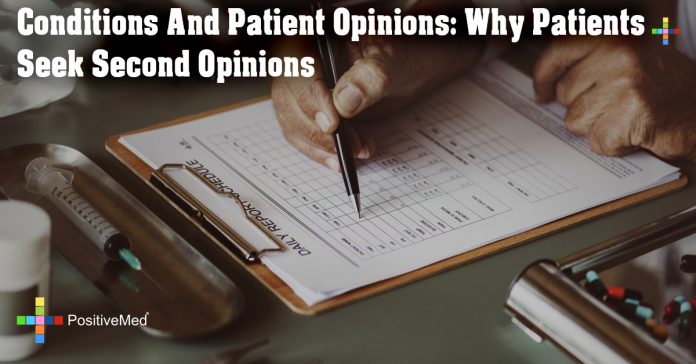 At one point or another patient has desired to have a second opinion when it comes to whatever sort of illness that they have been diagnosed with and the recommended treatment regimen that can be implemented in order to help them with their problem.

Some doctors tend to find such actions to be somewhat insulting wherein it seems to imply that they do not believe in the capabilities of their primary care physicians. What these doctor’s fail to understand is that deep down these patients do believe in what the doctors are telling them; however, it is human nature to basically rebel against the inevitable or against news which they deem as being “unpleasant.” It is based on this that this paper will examine the current issues surrounding the desire for patients to seek second opinions and how doctors can assist them rather than deride them.

As explained by TheSecondOpinion.org, for some patients a diagnosis can be the life-changing experience, yet it is one that causes more negative rather than positive reactions. For instance, if a doctor were to determine that a patient has cancer and that they would require considerable treatments in order to live, it is likely that the patient would not take that news well at all. They would, of course, be in denial initially, rage against it, feel sadness and eventually acceptance; however, in between these stages the patient would always attempt to figure out some way that they can get the diagnosis. Some form of fleeting hope that would enable them to get out of their current situation and hopefully live a normal life. This is why they tend to want to have a second opinion when they receive such a life altering diagnosis. Doctors, in this case, need to assist them in knowing what to do and even potentially provide copies of the medical transcription they have on patients from providers like Eyered Transcription

How to Assist Patients

Sometimes assisting patients entails the use of more than just you giving a diagnosis, you need to be able to help them potentially find alternative specialists who may be able to assist them in getting the second diagnosis they are after. While it may seem to be counter-intuitive to transfer patients to another doctor, you have to understand that this is connected to preserving their own mental well-being than it is about their lack of trust in you. Even if the tests that will be conducted will have the exact same results, people want to be able to feel that there is some way that they can get out of this and, as such, they will do whatever they can in order to find some way to make themselves at least slightly feel better despite the futility of their actions. It is due to this that when the patient’s ask if they could seek a second opinion, you as a doctor need to provide them with all the necessary information that you can possibly obtain so that they can seek another specialist.

RELATED ARTICLE: Why Isn’t My Medical Doctor Helping Me with My Thyroid Problem??

As explained by CureToday.com, you need to be able to reassure them regarding their current state and tell them that your door will always be open if they require your assistance in the future. If they receive the same diagnosis from the second specialist, it is likely that they will remember the way that you treated them and, as such, they will come back to you to seek potential treatment options.

Another aspect to think about though when it comes to patients seeking a second opinion are the various cases of misdiagnosis that have been appearing in the news as of late. CBS News helps to prove this by showing cases ranging from a person without cancer being subjected to cancer treatments to people without an illness being diagnosed with one.

The sheer amount misdiagnosed patients has created a considerable furor among members of the general public who see the current state of the medical industry as a whole as being highly flawed. It due to these factors that when a person is given a dire prognosis by a doctor, one of their first thoughts is not how they will be dealing with the illness; rather, they will think that some sort of mistake has been made and that this may be a case of additional medical misdiagnosis.

RELATED ARTICLE: Doctors wanted to remove a tumor from her womb when they discovered she’s pregnant. What happened next made me speechless!

When taking this current mindset into consideration, it is not surprising then that it is necessary for patients to actively seek the second opinion that they want. If they never receive it, it is unlikely that they will cooperate with any proposed treatment regimen that the doctor would recommend.

In conclusion, doctors should not feel insulted if they encounter a patient that seems to mistrust their initial diagnosis. They need to understand that the patient is afraid and needs further affirmation regarding their current state in order to be put on the road towards proper treatment.