Your Dog Hates It When You Do THIS! 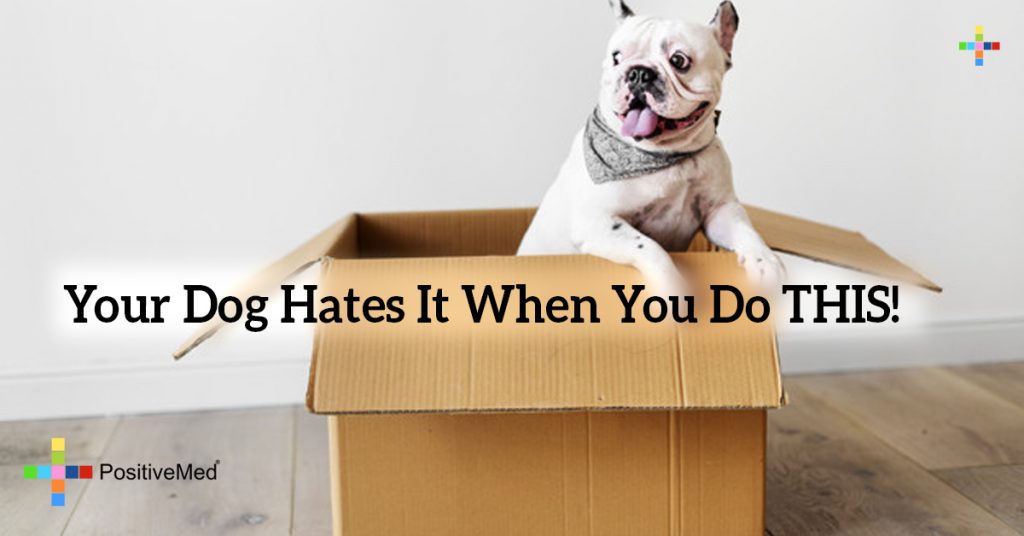 Your Dog Hates It When You Do THIS!

Humans are highly communicative creatures. While nearly every species on Earth relies on communication in some form or another, it’s our intricate social dynamics that set us apart. It’s no surprise then that we instinctively want to share the same love we have with our closest friends and family with our pets, but it turns out some of the ways we express interest and affection mean something else entirely and could actually be annoying to our dogs.

Here are eleven common things that pet owners do that they may interpret as friendly and affectionate, but their dogs can’t stand.

We can convey entire messages and emotions with just one lingering stare, but that message doesn’t mean what we think it does to a dog. Canines are pack creatures, and even domesticated dogs still function on that mentality. Staring is used to challenge and intimidate other members of a pack, and if staring at your dog in the eyes elicits barks and soft growls, those don’t mean “Talk to me!” as much as “You want a piece of me?”

A hug is a very human action. They don’t exist in the dog world, and when you hold your pet close, he or she will take it the same they would another dog placing their foreleg or paw on the back of another dog: a display of dominance.

Dogs don’t speak English or any other human tongue, so even though your pet may know some commands and their name, they don’t know what you’re talking about when you’re angry and lecturing them on chewing up the trash. Learn about body language and how to effectively communicate with your pooch for a less one-sided convo.

8. Petting the Face or Head

You probably don’t like it when someone suddenly grabs your face or pats you on the head. Dogs are very similar, and even though some may enjoy ear scratches and caresses, many will lean away from being touched over their head and on the snout.

You may think some owners give their dogs too much structure and rules. They’re just animals, not kids, right? Actually, packs function through a hierarchy and thrive on rules. Discipline, clear boundaries and structure can bring a dog security. Otherwise, your pup will probably go through life thinking he’s in charge and respond with confusion or even aggression when he’s corrected.

RELATED ARTICLE: How to Read Your Dog’s Body Language

You may want you and your best friend’s dogs to share the same inseparable bond as their owners, but you wouldn’t like to be forced to hang out with someone you didn’t mix well with, and neither does your dog.

5. Walks Without Any Exploration

Scent is one of a dog’s strongest senses, so when you tug on the lead because your pup wants to stop and smell the roses (or just relax and sniff the breeze for a bit), you’re interfering with their inborn impulses.

This doesn’t just mean in anger. Loud shouts and squeals aren’t used in packs unless they’re done so in a threatening fashion, so try to keep your environment – and your voice – at a soothing, level tone.

RELATED ARTICLE: Tips And Tricks To Train Your Dog/Puppy

It may seem like your dog is amused when you hover a treat over his head, but the truth is that dogs will be just as irked by relentless teasing as humans. Think about that the next time you decide to psych your dog out during a game of fetch.

Dogs don’t understand that the loud rush of water and being lathered with funny smelling shampoo is good for them. A bath can be traumatizing to a dog, especially if not introduced to it properly at a young age. Make sure you look up the right way to show your dog the bathroom instead of just pinning them down in a tub while they try to escape.

They may look adorable in a Princess Leia wig or a Superman cape, but dogs don’t share our enthusiasm for dressing up, and all they know when the costume comes out is that they’re going to be uncomfortable and most likely have their hearing, vision or range of motion constricted.

How do you like to communicate with your dog? Let us know some ways that you bond with your canine companion and feel free to offer some suggestions on how other owners can do the same in a way their pets will enjoy as much as they do.