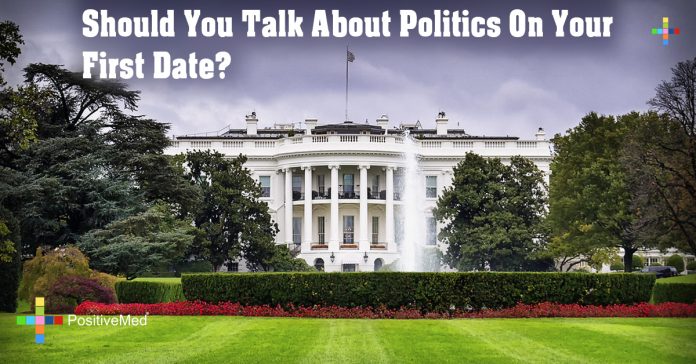 Should You Talk About Politics On Your First Date?

First dates bring with them excitement, anticipation, and more than a few nerves. What do you wear? Where’s the best place to go? What will you say? Ah. There’s the real rub. What to say, especially when it comes to topics that some people consider to be taboo like politics. When it comes to talking politics on a first date, two camps exist. Naturally, they stand at opposite ends of the spectrum.

Many people feel very, very strongly about their political beliefs and affiliations. If you count yourself among this group of people, the chances are that you’ll want to know right away if a potential date feels very differently about hot button issues. This is especially true if you are marriage-minded. Topics like gun control, health care reform, or immigration spark spirited debates even among those who agree. This becomes all the more true among those who don’t. More specifically, if you feel passionately about something like immigration and feel that people should do all they can to help immigrants, you probably don’t want to end up with someone who doesn’t. That said, a recent Zoosk survey revealed that men in the 18 to 24-year-old bracket changed their political views based on a partner’s influence, so this doesn’t have to be a lost cause.

RELATED ARTICLE: The Secret Why Your First Date Should Be Cheap And Fast

On the other hand, there is the argument that says that the first date is not about marriage, it’s about getting to know that person. While some people strongly affiliate with their political beliefs, not everyone does. It takes time getting to know a person to determine how strong his or her beliefs are. While it is possible that some people toe the party line on all issues, chances are a single opposing political stance could be just that, just one different view. That being the case, taking a stand on something on the first date isn’t really practical. If the person is otherwise a good match for you, it might be worth getting to know him or her before making a decision about opposing views.

It is also the case that some political themes such as family planning have a greater gender divide. A 2014 Pew Survey showed that when talking about politics, women tended on the whole to family and child issues with people they knew and trusted. In other words, these women wouldn’t necessarily talk about hot button issues like abortion on a first date, simply because this man they were spending time with wasn’t a family member or a friend.

For most people, just getting a date to talk about anything on a first date was welcome. And according to a Zoosk survey, a full 77% of people said that if their date started a conversation about something, they’d join in. Twenty percent of women wanted a possible future partner to reveal his political leanings from the beginning. That said, plenty of people willingly adjusted their political views because their partner influenced them to do so.

The bottom line as dating expert Matthew Hussey pointed out recently on the Rachel Ray Show is to be interesting. You should be able to say the “why” of your beliefs. That’s what adds to the excitement of the date and gives you the best chance of determining whether or not differing political views need to be a deal breaker for you.