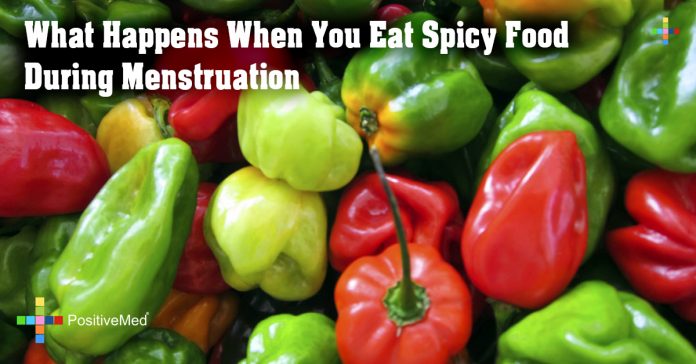 What Happens When You Eat Spicy Food During Menstruation

Is it good to eat spicy foods when a woman is going through her menstrual cycle? Unfortunately, due to insufficient studies or research, the answer is not scientifically conclusive. Depending on whom one speaks to on this topic, the forthcoming answers are wide and sometimes border on myths. One thing is for certain, no woman, especially in the over 40s group, can say they react to eating spicy food during menstruation cycle in the same manner as other women.

In Chinese Traditional Medicine(CTM) circles, the mindset is to basically stay away from spicy foods during menstrual cycles to successfully avoid painful periods and large blood clots from forming.

A recent Chinese observational study, published in many medical journals revealed that people eating regular spicy foods had a lower risk of dying from cancer, ischemic heart disease, and respiratory disease. However, none of the observations admittedly proved that spicy foods were behind the lower chance of deaths, which was 10 percent to be exact. More vitally important, no test group was given to women exclusively to determine a possible menstrual factor.

What Constitutes A Spicy Food?

Chili peppers or other capsaicin-containing foods, and spices such as curry, onion, chili, ginger, garlic and turmeric, are all common spices found in many cultures and ethnic cuisines.

Some Benefits of Eating Spicy Foods During Periods

Fresh chili that contains capsaicin has reportedly been classified as an anti-cancer, anti-inflammatory and anti-hypertensive agent. Beneficial effects against obesity and cardiovascular disease have also been duly noted.

As far as women’s menstrual cycles are concerned, cayenne peppers are said to help reduce menstrual bloating as they contain vasodilators that, in turn, help improve blood circulation in the body. Likewise, fennel, coriander, turmeric, cardamom and saffron are digestive enhancers and help alleviate PMS symptoms.

RELATED ARTICLE: 8 Things That Mess With Your Period

Some Cons To Eating Spicy Foods During Periods

As sometimes reported by some women, spices can trigger hot flashes, postpone a period’s cycle and provoke skin rash, acne or even hives. Likewise, the mucosal lining of your stomach and intestines can thin out due to the acidity of the spices. In some Ayurvedic circles, it is believed that spicy, hot foods or acidic ones like tomatoes, can also cause intense and painful menstrual cycles.

That being said, not all women report the same symptoms after eating spicy foods during their menstrual cycles, and in the absence of conclusive scientific evidence, this is not easily determined.

If you know of someone still having their menstrual cycles, have they ever mentioned some noticed side effects of having eaten spices during their periods? As for yourself, try experimenting with spicy foods during menstruation to see if it affects you in any positive or negative way.