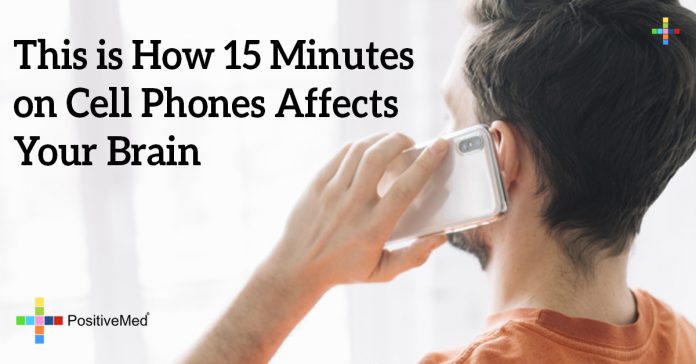 This is How 15 Minutes on Cell Phones Affects Your Brain

The cell phone is placed everywhere, the shirt/blouse pocket, the pants pocket the purse, or simply held by hand. As with other aspects of modern technology, scientists have begun to look at the potential health effects of this handy little device. So far, the jury is still out.

Some types of electromagnetic energy can cause serious health effects, according to the US Food and Drug Administration (FDA). X-rays, for example, can damage tissue and cause burns. High levels of radiofrequency energy can also burn tissue. Cell phones use radio frequency energy, but at a low level. The FDA notes that although the eyes and testes are both vulnerable to high-level RF because they have no way to handle excessive heat in the tissues, there’s no evidence that cell phones cause damage to the human body. However, an article reported in the September 2014 issue of Environment International found otherwise. A meta-analysis – a review and comparison of many studies on a particular subject -of 10 studies found that cell phone use can affect the quality and mobility of men’s sperm.

RELATED ARTICLE: 5 Dangers Of Putting Your Phone In Your Bra

The human body is an electrical organism. The nervous system uses electrical messages – a form of energy -to control all body functions. The electrical activity in the heart can be measured with an electrocardiogram, or EKG, while the electrical activity in the brain is measured with an electroencephalogram or EEG. A June 2015 article in PLOS One measured the effect of using a cell phone for 15 minutes on the EEGs of 31 women. The cell phones were placed on the chest or held next to the ear. The researchers found using a cell phone next to the ear changed the women’s brain waves.

Children and adolescents may be particularly vulnerable to RF. Children have thinner skulls, which allows more penetration of RF, and their brains are still developing. A December 2014 review of studies that analyzed cell phone effects on children and adolescents reported numerous negative findings. For example, one study found an increased risk of brain cancer within the first three years of a cellphone subscription.

Chinese study found an increased risk of tumors in the parotid gland, which is in the neck close to where the cell phone is held to the ear. One case study reported on breast cancers that developed in very young women who had placed their cell phones in their bras. Breast cancer normally develops in women after the age of 60. Cell phone radiation affected baby mice in the womb, according to a study from Yale reported in the March issue of Scientific Reports. The researchers placed an activated cell phone in the cage for the duration of the pregnancy. Mice from cell phone cases were more likely to be hyperactive and showed memory problems compared to mice not exposed to the activated cell phone during fetal development.

RELATED ARTICLE: Charging Your Phone While You Sleep Could Make You Fat

So what’s a cell phone user to do? Prevention is always better, and there are some strategies to reduce your exposure. The most important is to limit your cell phone use. Make only the most necessary calls and keep them short. Text rather than talking when possible, as this keeps the cell phone away from your head. Use a speaker or headset for the same reason, but don’t put the phone next to your body during use. Using your cell phone in a car or metal box like an elevator, or when you have a poor signal, means it must use more power to connect, increasing the risk of RF exposure. Low-radiation phones are also available. Take care of your body with good nutrition, exercise, and adequate sleep. A healthy body is better able to resist radiation of any kind.