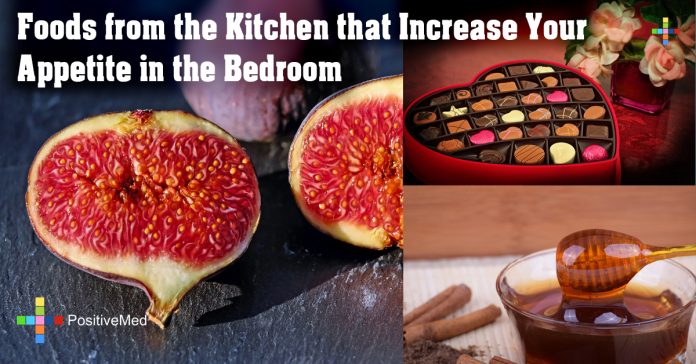 Foods from the Kitchen that Increase Your Appetite in the Bedroom

Have you lost your will to “make whoopee ? There are reasons you may not be interested in “getting your groove on” at this time in your life:

Treatment for months of not being “in the mood”, depends on the reason. Hormonal treatments are available, as well as counseling for emotional causes (stress, anxiety, relationships, etc.), and medical consultations. Along with addressing the cause of your current disinterest in “hanky-panky”, have you considered food as an aphrodisiac? Here are a few examples of “Aphrodisiac Foods”.

Almonds are symbols of fertility. Their fragrance is believed to arouse passion in women. They provide abundant amounts of vitamin E, also considered an aphrodisiac.

Honey, an excellent source of boron (a mineral) is used, among other things, to increase testosterone levels. It also helps regulate the levels of testosterone and estrogen and gives an energy boost. Honey also contains nitric oxide, released into the blood during arousal.

Chocolate contains PEA (phenylethylamine), a chemical that causes the body to release dopamine (also released during satisfaction peak), which produces a feeling of euphoria. It also contains tryptophan that is a primary component of serotonin, another “feel good” chemical. Dark chocolate contains the most amounts of PEA, and studies show it stimulates the brain to release endorphins.

Bananas are a superb source of the B vitamins, potassium, fiber, and vitamin C. The B vitamins and potassium are believed to be necessary for $ex-hormone production. It also contains an enzyme that is considered to enhance the male desire to “hook up”. Some think its shape also adds to the mood.

Pomegranates an antioxidant food, is found to be an effective treatment for the inability to “perform”.

Watermelon is believed to affect the body like Viagra does because of its phytonutrient called citrulline. They relax blood vessels and improve circulation, allowing you to get aroused in less time.

Figs are considered aphrodisiacs because of their voluptuous shape, a pleasing aroma, taste, and succulence. The seeds symbolize fertility in many cultures. Figs are also an excellent source of antioxidants.

Avocados contain high levels of vitamin E, considered a boost to the “urge to merge”. Its’ pear shape, and the fact that they often hand from the tree in pairs, is also considered sensuous.

Vanilla is one of the spices deemed to produce aphrodisiac effects. It contains small amounts of the B-complex vitamins that help to regulate body metabolism. Its scent is also considered alluring.

Do foods help make you “frisky”? Is it fact or fiction? If your lust is lost, and you want it back, try it for yourself. Bon appetit!