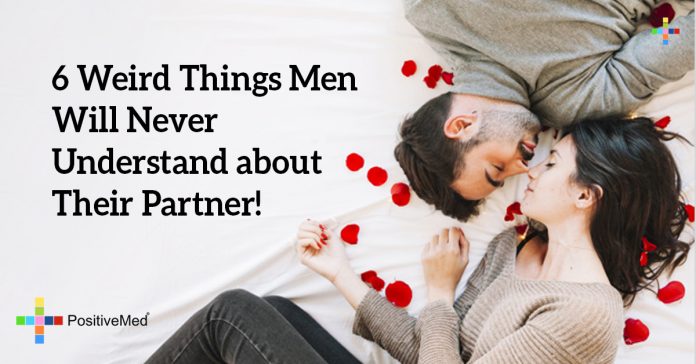 6 Weird Things Men Will Never Understand about Their Partner!

Unless you actually live in outer space, surely you have heard that men are from Mars and women are from Venus. Men are often perplexed by the species called women because their behaviors are strange, at least to us. Even though men aren’t willing to admit that you are still somewhat of a mystery to them (they secretly like that), there are several points that leave them totally clueless.

The Shoes
Yes, they are aware that they can only wear one pair at a time, but when she hears those stilettos calling her name from the store front, they simply cannot resist. Women know what you are going to do next, so don’t even think about questioning why they wear sky-high heels even though they are super painful. Simply put, they look fantastic!

The Secret Garden
No guys, there aren’t magic mike dancers or a Jacuzzi in the ladies’ room, but they can hope! Just like in the wild, the wildebeest and women must travel in packs. Why don’t you understand that not only is there safety in numbers, but the ladies need to be able to talk about the shoes they just bought. See number one for more details.

The Inquisition
Another beef men have is why women ask so many questions about our ex. To set the record straight, they aren’t insecure. Women ask these questions because since they have super hero abilities to decode just about anything we say, our response will shed light on the REAL reason you are no longer with her, and in turn, they will be better equipped to deal with you later if the need arises. (Ladies, don’t forget to turn of that light and untie him from chair now).

Undercover Octopus
Yes, with only two hands, they can type an email, talk on the phone, balance a checkbook and stir-fry Kung Pao chicken simultaneously. Multi-tasking is their specialty even in stressful situations. Don’t worry guys, they still only have two hands even when the lights go out.

Cuddle Quota
Women need us to know they are fiercely independent, but they still want their fair share of post-coital cuddles. We simply cannot turn our backs to them and go to sleep. If we do, they will simply become a contortionist and work their way in. It doesn’t matter you have told them 100 times not to be offended, they still will be, so work with them guys.

Does That Come in a Bottle?
You might want to write this one down fellas. Women have the keen ability to remember just about anything, good or bad. They are just born this way and associate memories with emotions. This is why we look at them like they need a psychological evaluation when they start crying and say, “Do you remember that time?” Even better is when you are sitting at brunch and over your mimosa, your woman looks at you with eyes similar to Linda Blair’s in the Exorcist and say, “Do you remember when you…..?”

Yes gentlemen ,women know they can be a bit confusing for us, but how boring would like be if they were just like you?