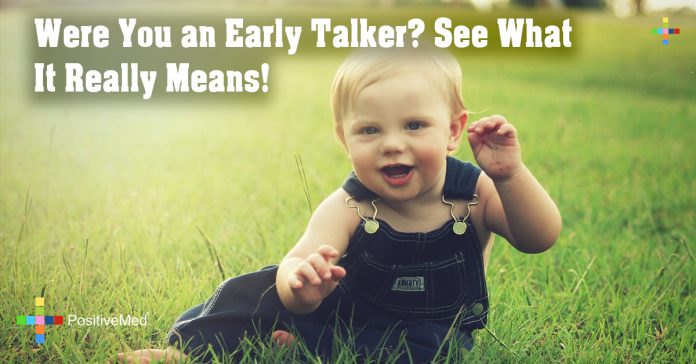 Were You an Early Talker? See What It Really Means!

Babies begin developing language skills very early in life, and some studies have even shown that babies can begin learning about speech patterns and more in the womb. Their language development will continue after birth as they hear speech when people speak or read to them as well as by listening to people nearby speak to them. Speech and language development can vary drastically from baby to baby, and some people may wonder what it means if their baby begins to talk at an early age.

What Is an Early Talking Age?
Many babies will begin babbling words that sound like actually words around approximately six months of age. These are typically sounds like mama, baba or dada, and some people may think that the baby is trying to say mom, dad or bottle with these utterances. However, these are typically words that the baby will say when testing out their speech, but these words will typically not have meaning for the baby until approximately one year of age. If a baby starts babbling before six months of age or begins saying words with clear meaning or intention behind them before approximately one year of age, this is considered to be early.

With this in mind, parents are encouraged to talk and ready to their babies to promote language development. If parents notice any delays or have other concerns, they should contact their child’s physician for further information and analysis.