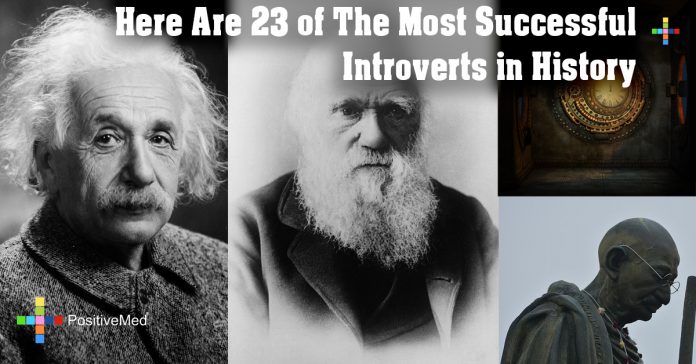 Here Are 23 of The Most Successful Introverts in History

Introversion is a personality trait characterized by a tendency to be more focused on interior thoughts, feelings and moods rather than the external world. The concept was first popularized by Carl Jung and was incorporated in other theories of personality like The Big Five Theory. While extroverts find social interaction energizing, introverts find it draining. They draw energy from solitude and tend to be quiet, thoughtful and reserved.

The following people are believed to have been or are introverts:

Sir Isaac Newton (1642 – 1726/7) was an English mathematician and physicist. His book Philosophiæ Naturalist Principia Mathematica (Mathematical Principles of Natural Philosophy) is one of the most influential science books ever written. Along with Gottfried Leibnitz, he developed calculus.

Abraham Lincoln (1809 – 1865) was the 16th President of the United States. He guided the Union during the Civil War and abolished slavery through the Emancipation Proclamation. He was famous for his oratory prowess and his Gettysburg Address is one of the best-known speeches in American history.

Charles Darwin (1809 – 1882) was an English geologist and naturalist who is best known for his development of the theory of evolution. He began to develop the theory after exploring South America during the 1830s and spent decades collecting evidence. He published his masterwork, Origin of Species, in 1859.

Emily Dickinson (1830 – 1874) was an American poet. She wrote over 1800 poems, but published only a few during her lifetime. Her younger sister, Lavinia, published the rest several years after Dickinson’s death.

RELATED ARTICLE: Facts About Being An Introvert

Michael Jordan (1963) is an African-American athlete and businessman. He is best known for being a basketball player with the Chicago Bulls during the 80s and 90s. He currently owns the Charlotte Hornets.

Mahatma Gandhi (1869 – 1948) Born Mohandas K. Gandhi, he was a lawyer who became the leader of India’s struggle for independence. He was known for his development and use of nonviolent civil disobedience. His success in leading India to independence inspired other civil rights movements in the world.

Calvin Coolidge (1872 – 1933) was the 30th President of the United States. He was known for his taciturnity which earned him the nickname, “Silent Cal.”

Hermann Hesse (1877 –1962) was a German-born Swiss painter, poet and novelist. His best-known works include The Glass Bead Game, Steppenwolf and Siddhartha. He was awarded the Nobel Prize for Literature in 1946.

Albert Einstein (1879 – 1955) was a German-born physicist. He developed the theory of relativity, a cornerstone of modern physics. He also developed the formula for mass-energy equivalence (E = mc2 ). He published over 300 scientific papers.

Pablo Picasso (1881 – 1973) was a Spanish artist, and he was considered one of the greatest artists of the 20th century. He was one of the founders of Cubism. His best-known work was probably Guernica, which depicted the bombing of Guernica during the Spanish Civil War.

Franz Kafka (1883 – 1924) was born in what is now Czechoslovakia. He wrote novels and short stories in German. His best-known works include The Castle, The Trial and “The Metamorphosis.”

Eleanor Roosevelt (1884 – 1962) was an American diplomat and politician. She was famously the wife of President Franklin Roosevelt and thus served as First Lady longer than anybody else in American history. She greatly supported civil rights.

Rosa Parks (1913 – 2005) was an African-American civil rights activist. She first became famous in 1955 when she refused to obey a white bus driver’s order to give her seat to a white person after the white section in the bus was filled.

Audrey Hepburn (1929 – 1993) was a British actress. She was probably best known for her roles in Breakfast at Tiffany’s (1961) and My Fair Lady (1964). She found the role of Holly Golightly in Breakfast challenging and once commented, “I’m an introvert. Playing the extroverted girl was the hardest thing I ever did.”

Neil Armstrong (1930 – 2012) was an American astronaut and aerospace engineer. He is most famous for being the first human being to walk on the moon.

Haruki Murakami (1949) is a Japanese writer. He has written short stories and novels, and he has translated works by American and European writers into Japanese. One of his most recent works is a short story collection, Men Without Women (2015).

Bill Gates (1955) is an American inventor, businessman and philanthropist. He is most famous for being one of the co-founders of Microsoft.

J.K. Rowling (1965) is a British author who is best known for the Harry Potter series. She has also written crime fiction under the pseudonym of Robert Galbraith.

Elon Musk (1971) is an inventor, engineer, and businessman who was born in South Africa. He has founded or helped found PayPal, Tesla Motors, and SpaceX. He has been working on a transportation system called the Hyperloop.

Marissa Mayer (1975) is an American businesswoman who is the current president and CEO of Yahoo! Before that, she had been an executive at Google.