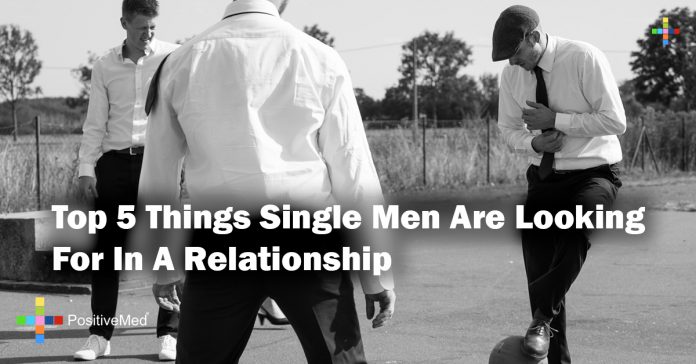 Top 5 Things Single Men Are Looking For In A Relationship

It is one of the age-old questions. In this post, we will explore the top five things single men are actually looking for in a relationship. Take good notes:

1. Loyalty
Yes, this may sound cliche but the truth is that while men are stereotypically cast as commitment-phobic when a man is wanting to settle down, he wants the same loyalty from his partner. Being loyal, which can encompass everything from fidelity to simply defending his honor in front of your sometimes caddy girlfriends, is of the utmost importance.

2. Room for Growth
In the ongoing assumption that many single men fear commitment, oftentimes the fear comes from an innate nature to explore, expand, and try for more. A relationship with someone who still encourages room for growth and, perhaps, wants to grow as well allows the man to feel as though he still has a certain degree of freedom to explore and expand his horizons.

3. Companionship
There is a reason they call dogs “man’s best friend.” Now, before you get up in arms for fear that you have been compared to a dog, know that this means you’re hoping to join in adventures with him, happy to be at his side and go out into the world together, as partners.

4. A Partner in Crime
Just as companionship offers a man’s much-needed desire to connect and experience life together, he also needs some mischief (or a willingness to take part in his mischief) from time to time. Whether you are the type to pull-off skinny dipping in a pond at night or simply share his sarcastic sense of humor, having a partner in crime allows a man to feel as though his secrets won’t be shared, his experiences will be shared, and his mischief won’t fully be denied.

5. Someone to Complement Their Nature
We all, hopefully, have grown tired of hearing the cliche “opposites attract.” If this were true, John Stewart and Ann Coulter would share a white-hot love that none of us could ever match. The reality is that men need someone who complements his nature (notice that’s “complement” with an “e” not “i” but those are nice, too!). You might draw out his social side which would get neglected without you. Or maybe you encourage his drive which helps his professional career. Complementing natures can truly nurture relationships to new levels.