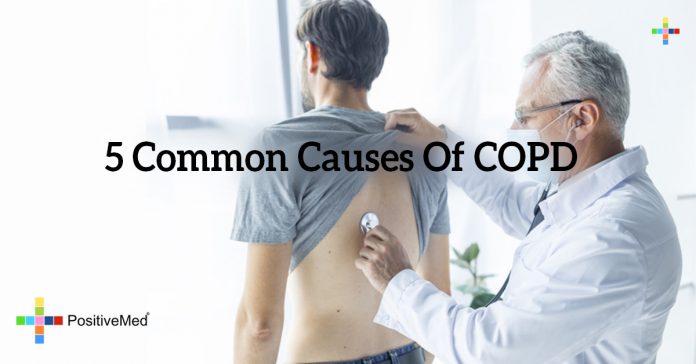 COPD, or Chronic Obstructive Pulmonary disease, is an ailment that affects the lungs. Its symptoms include a progressive decrease in lung function. It is estimated that in the United States more than 12 million individuals have been diagnosed with this disease. Researchers believe that there are many individuals who are battling with the disease, but as of yet have not had it diagnosed. COPD ranks number four in leading causes of death in the United States. It appears more in older individuals and affects more men than women. The death rate between men and women who have the disease is the same.

• The number one cause of COPD is smoking tobacco products like cigars and pipes.
• Next on the list is secondhand smoke. Individuals who don’t smoke but live with smokers or work in an environment surrounded by smokers can get COPD.
• Third on the list is pollution. Breathing in toxic fumes and dust can cause the disease.
• Number four is genetics. It is estimated that 3 in 100 people have a defect in their DNA coding that leads to this infirmity.
• Finally, asthma can in rare cases lead to COPD.

A long and chronic cough is the most recognizable symptom of COPD. Other symptoms associated with COPD will usually appear once the disease has progressed and significant lung damage has taken place. COPD symptoms are episodic, with some episodes being more intense than others. Other symptoms would include wheezing, which happens as a result of excessive mucus blocking the airways, as well as a tightening of the muscles in and around the lungs that will also narrow the airways.

A third symptom is shortness of breath. Inflamed airways begin to constrict and it becomes difficult to catch a breath. In the early stages of COPD, this symptom is noticed after doing strenuous activity. Over time, simple chores like getting dressed, taking a bath, walking the dog, or even resting can lead to breathlessness.

Fatigue results because of a lack of oxygen in the blood and in your muscles. It may also be a result of the lungs working overtime to get oxygen into the blood and to expel carbon dioxide.

Other symptoms include increased respiratory infections, headaches and fevers, swelling in the feet and ankles, weight loss, and cardiovascular disease.

There is no cure for COPD. However, there are things that individuals can do to minimize their symptoms. Included on this list are things like stopping smoking and avoiding air pollution. Medicines can be used to limit symptoms associated with shortness of breath. Individuals dealing with COPD are encouraged to increase their overall health by improving diet and increasing activity.