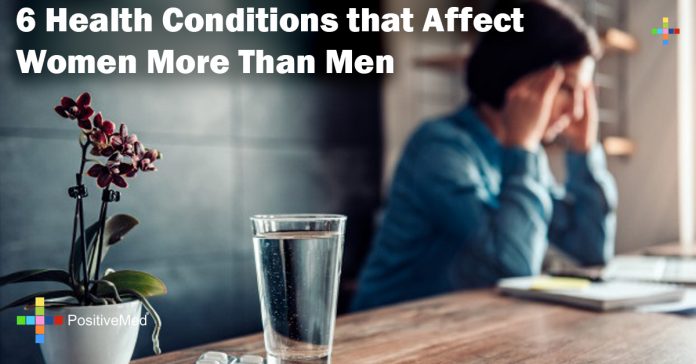 There are conditions and diseases that primarily affect women, and some that most people erroneously associate with them like eating disorders or breast cancer. In the same vein, there are a whole host of health problems that aren’t frequently associated with women, which means they will struggle to find help for months or even years at a time. A perfect example of this are autoimmune disorders which are far more common in women than men, and are featured on the list below.

• Lupus – this is a chronic autoimmune disease. An autoimmune disease is where the body’s immune system attacks healthy tissue, leading to damage to a person’s joints, organs, and even skin. The symptoms aren’t the same from person to person, though most common similarities involve headaches, hair loss, extreme fatigue/lethargy, as well as swollen joints, hands, eyes, legs, and feet. More than 90% of the victims of Lupus are women and it can go undiagnosed for years, which has a great long term affect on their health.

• Depression – this disorder is twice as common in women, with nearly twenty percent of all women developing it at some point in their lives. The current theory relies on the biological disparity between men and women. Women typically experience greater hormonal fluctuations during their lifetime, which affects their mood. However, there can also be psychological explanations, such as a tendency to ruminate, which can predispose women to depression. Women also live longer, and older age often comes with loneliness and loss. Another factor may be that women are more likely to talk to a doctor about their symptoms, which leads to diagnosis.

• Chronic Fatigue Syndrome – The CDC describes this syndrome as a complex and devastating disorder where people experience overwhelming lethargy that is not improved by sleep. Other symptoms may include memory loss, insomnia, and even muscle pain. Basic tasks such as showering, eating, or dressing can be overwhelming to people with this disorder. Women are at a much greater risk for this, nearly four times more, and again for reasons that are unclear.

• Multiple Sclerosis – this disease affects the central nervous system and is two to three times more likely in women. Most experts classify multiple sclerosis as an autoimmune disease, but a specific antigen (a protein that stimulates an immune response) has yet to be identified which makes other experts wary to classify it that way. Most MS sufferers experience their first symptoms between the ages of twenty and forty and vary wildly from person to person. Although more than 2.1 million people worldwide have this condition and there are treatments to lessen the severity of symptoms, there is no cure.

• Irritable Bowel Syndrome/Celiac Disease – We grouped these two together because they often will be diagnosed interchangeably. Irritable Bowel Syndrome (IBS) is a common disorder that affects the large intestine causing pain, bloating, cramping, gas, constipation, and/or diarrhea consistently for at least three months at a time. When people think of celiac, they think of gastrointestinal issues like bloating, severe stomach pain, weight loss, and diarrhea, but there is also evidence that suggests it can take a toll on a woman’s reproductive ability. As the average age of diagnosis is 45, and the fact that it can take ten years to receive an accurate diagnosis, there’s a possibility that the disease damages the reproductive system for years.  IBS also affects the gastrointestinal tract, primarily in the large intestine causing pain, bloating, diarrhea, gas, and constipation for at least three months at a time. Many people don’t recognize the symptoms for Irritable Bowel Syndrome and do not seek help, even though there are over 3.5 million doctor visits for this illness annually in the US each year. Women are far more likely to have IBS than men, and their symptoms are often worse around the time of menstruation.

• $e*[email protected] Transmitted Infections (STIs) – Current estimates suggest that 19 million new infections occur in the US every year. While they affect both men and women, it’s often easier to infect a woman than a man. The lining of the vagina is more delicate than the skin on the penis, which means it’s easier for bacteria and viruses to enter the bloodstream. Women are less likely to have symptoms of diseases and will often write them off as a yeast infection – which usually means they won’t get treatment until serious damage has been done.
Women tend to see their doctor more often, so when you’re there if you think you have any of these problems, please get tested. If something is treated early, the damage will be less and it’ll be easier to treat.