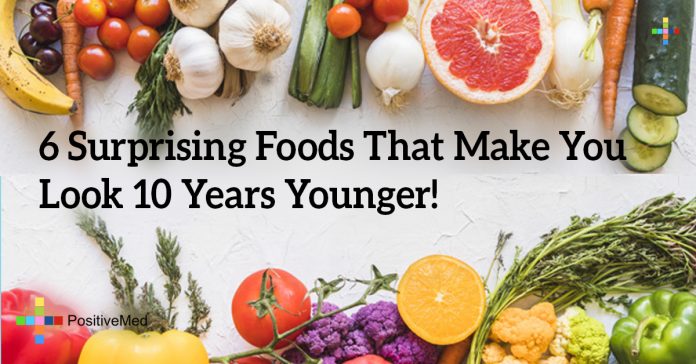 As most individuals age, they often think of different ways to look younger. While surgery seems like a popular option, there are several healthier methods to make one appear younger than they are. There is a plethora of foods available on the market that will assist individuals with turning back the clock on their appearances, most of which individuals had no clue about. Below are six surprising foods with anti-aging benefits that will make one look tens years younger.

Cucumbers
For years women have been adding cucumbers to their eyes with the hope that it may make them appear younger. Well, in reality, it actually works. Just by applying them to your eyes it can reduce swelling and irritable skin. And even eating them can muscle and support skin cells and several ligaments.

Grapefruit
This yummy fruit does everything it can to protect individuals and their fight against aging. According to WomensDay, its jam-packed Vitamin-C will help protect the skin from sagging.

Fish
Fish happens to have the one nutrient that many individuals need: omega-3. Fish is often used as a healthy alternative for those who indulge in the many unhealthy meats and fried foods, which will indeed make an individual look younger. According to Details.com, astaxanthin, which is the the pink pigment in fish fights the harmful cells that cause aging skin. Fishes like salmon and tilapia, all have the essential nutrients to make one appear younger than their actual age.

Red Wine
Although, wines have a pinch of alcohol in them, several health enthusiasts have raved at the health benefits one can receive from wine. Red wine has several compounds that fight carefully to prevent cells from aging. Women’s health magazine, has reported that resveratrol in red wine provides longevity.

Carrots
Carrots not only assist heavily on vision, they also fight aging. Beta-carotene, which is a main ingredient in carrots, help with renewing skin and free the radicals that make skin age faster. According to BetterAntiAging, one carrot a day can lessen potential illnesses and anything that contributes to aging.

Water
Water is the healthiest drink for any individual, especially for those who’s aim is to look younger. Water keeps the body hydrated, which does wonders to skin and overall health. While skin is obviously one aspect that water helps with, it also helps with one’s physique by maintaining the metabolism and keeping weight in control. If weight and skin are both maintained, then the overall appearance is in order causing one to look younger.