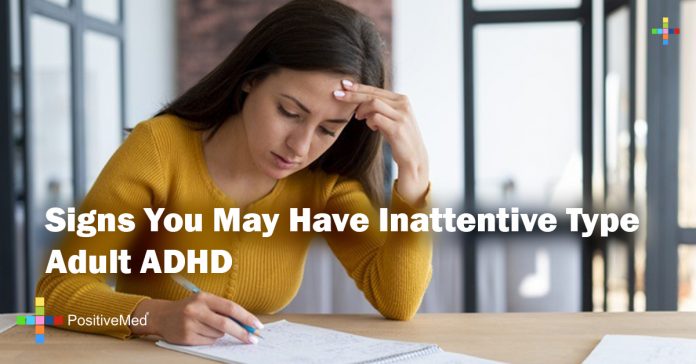 Signs You May Have Inattentive Type Adult ADHD

Attention deficit disorder is not only common in children but expands to adults as well, if you were diagnosed with childhood ADHD the likelihood of some of those symptoms in adulthood is high. Even if you were never diagnosed as a child you can be affected by it as an adult.

To help decide if you are affected by adult ADHD read through the following symptoms:

The lack of focus in adult ADHD is severe, it’s not just difficulty paying attention, it’s much more than that. You are easily distracted, find it difficult to pay attention to others during conversation, and miss details.

Do you often catch yourself not paying attention to work? Or frequently committing silly mistakes? You may have ADHD and routine tasks may be problematic for you.

It’s normal for people to have a chaotic life, but for those with ADHD it is more than that. It’s hard for them do things correctly and put things in the right place. They usually have problems with time management skills, procrastination, prioritizing, and chronic tardiness.

Often we set aside tasks we find boring until later, but people with ADHD tend to put them aside for so long that they forget to do them. Household chores and office projects are often delayed due to avoidance leading to problems in their professional and personal life.

Adults with ADHD often have impulsive behavior that includes unacceptable social behavior, interrupting others during conversation, and acting without thought to consequences. Impulsive behavior is often noted while shopping, by buying things they can’t afford and don’t need.

Adults with ADHD often have a poor image of themselves, sometimes due to their inability to focus on their work and perform tasks properly which causes problems at the office and at home, they often feel like a failure.

About 40% of people with ADHD smoke, compared to 26% of the general population. “Nicotine is very effective for a lot of ADHD symptoms and it’s not uncommon for me to see someone for the first time after they quit smoking,” says Dr. Wetzel. He explains, “That’s because they often start to have more problems with focus and concentration.” Adults with ADHD are more likely to consume alcohol or drugs in an earlier stage of life than those without ADHD.

People with ADHD tend to keep moving and doing things continuously. They are restless and get frustrated when they can’t do things immediately which can lead to anxiety, which is also a common symptom of adult ADHD.