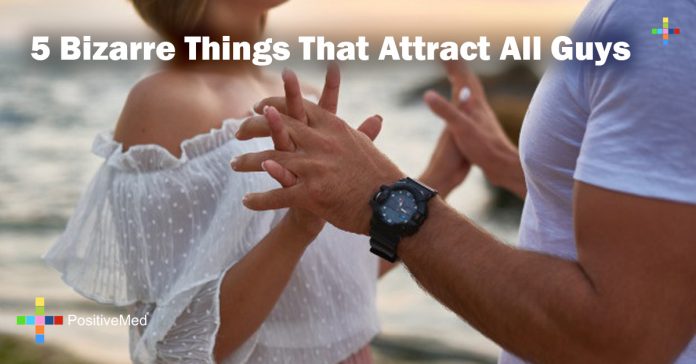 5 bizarre things that attract all guys

Have you ever had a crush on a guy, but you weren’t sure how to attract his attention? Is it possible to understand what men want, or is it a mystery?

Fortunately, there are a few tried and tested ways to get a guy’s attention and keep it. You may even find that approaching your dream guy isn’t as nerve-wracking as you think it is. Here are just five bizarre things that are sure to attract the right man and keep him.

1. Turn the Tables, and Ask Him Out On a Date

While our culture tends to place the onus on guys to ask potential mates, most guys will tell you that they’re terrified of this process and the rejection that comes with the territory. When women ask out guys, they’ll be taking a lot of the pressure off a potential significant other and quite possibly attracting their next boyfriend.

2. Show Your Values and Show Commitment

Dating is tough, especially because the media likes to portray men as playboys who only want a one-night stand. The truth of the matter is that most men are more sensitive than they like to admit, and many are seeking a stable long-term commitment. When guys see that you’re a serious person with serious values, they’ll find such qualities attractive.

3. Avoid Meanness at All Costs, and Don’t Stress Too Much on Appearance

Contrary to popular belief guys are not all about looks. Even the prettiest girl in the room will seem unattractive if she treats others around her with disrespect. The truth is that personality is a key factor in attracting a guy according to a recent study by several leading universities. And girls who are too thin? It’s not as attractive as many might think, according to an article in Salon.com.

4. Demonstrate Interests in a Wide Variety of Subjects

If you’ve watched much television lately, you’ve probably noticed that female characters in shows have become more realistic and show an interest in all sorts of subjects. For men, finding a companion with strong interests is a major turn on. While they might not say it, guys find women with abilities and talent extremely attractive.

One of the best things a girl can do to attract a guy is to play an instrument. Guys go wild for girls who can ably play a guitar solo or hit the drums like a true metal head. Sound strange? It’s true!

If you’re feeling a bit nervous about attracting a guy, don’t worry. Men are nervous too. Being confident is a great way to make an awkward social situation into a fun chance to meet someone new.