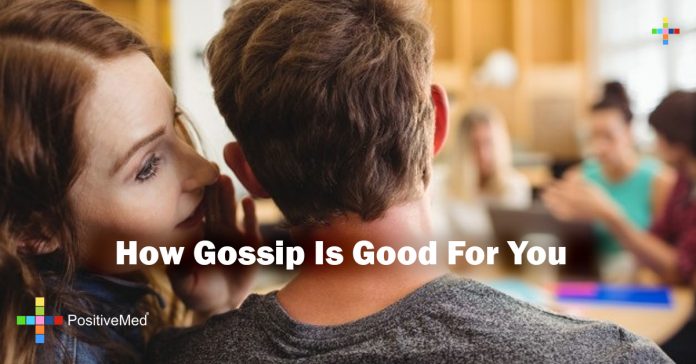 How Gossip Is Good For You

Among many social and self-help circles, gossip has long been considered something negative and to be avoided if one has any sense of higher moral standing. New studies suggest, however, that gossip, when done right, can actually be good for you and those in your social circle. Gossip with negative or mean intent usually still does more harm than good, but simply sharing the latest gossip news can actually be good.

Gossip Can Increase Bonding in Your Social Circle

When indulging in ordinary gossip, this kind of talk can actually increase the bond you have with others in your social group. It enhances the feeling that you have things in common like values, activities and opinions. As long as the gossip isn’t spiteful or hurtful toward others, it actually does more good than most people expect.

It Can Help You Help Someone Else

If you find out something about someone else in your social circle that he or she might be afraid to tell others, such as a serious illness, financial problems, or a family crisis, it can enable you to reach out to this person. Knowing what someone else may be going through, even if it’s supposed to be kept a secret, can actually benefit them if you let them know they’ve got your support.

Psychological Science just published a study that showed when group members share information about another group member, it helps the entire group identify members with too much self-interest and too little interest in the welfare of the group. As a result, group members can warn each other about other members who may be harmful. The group may also affect harmful members by shutting them out and requiring they change before allowing them back in.

Tips on Using Gossip in a Good Way

If you want to use gossip in a good way, stay focused on bringing others up rather than down. If a friend or colleague seems to be going through a rough time, find out if there’s anything you can do to help. Also, learn to separate the facts from unsubstantiated rumors or judgements when you hear gossip to prevent spreading gossip maliciously.