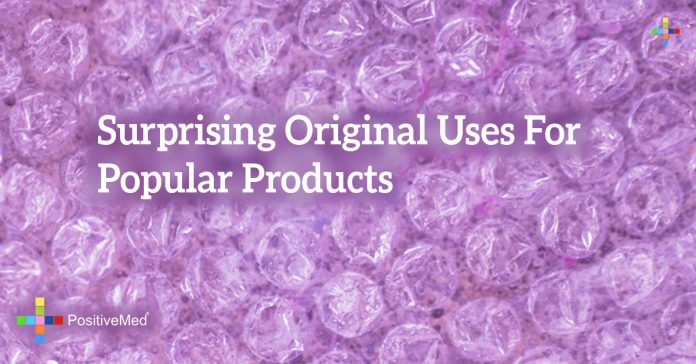 There are many products on the market with well known uses. However, some of them were not initially meant to be used as they generally are. There are products that had original uses that were very different from what they are known to do now.

• Coca-Cola: Now known as one of the most popular soft drinks out there, Coca-Cola initially was marketed as more than just a refreshing drink. It initially contained wine, and its inventor, John Stith Pemberton, touted it as “a most wonderful invigorator of private organs.” However, due to Prohibition laws, he had to remove the alcohol. When it was put on the market, he claimed that it cured various ailments, including addiction, depression, anxiety, indigestion, and even headaches.

• Bubble wrap: Though bubble wrap is now commonly known as a material that aids in packaging fragile items, it was initially created as wallpaper. Alfred W. Fielding and Mark Chavannes invented this new type of wallpaper and marketed it as the trendy new interior decoration idea. However, the idea never caught on, and these two inventors convinced the people at IBM that bubble wrap was a great way to keep their computers safe in packages. This proved to be true, and bubble wrap found its true calling.

• Listerine: Originally, this product, now mouthwash, was used in hospital settings, to irrigate wounds and clean/disinfect surgical sites. In 1895, dental professionals started using it, and in 1914, it became the first mouthwash to be sold over the counter.

• Lysol: When Lysol initially came out in the 1920s, it was marketed as a genital disinfectant for women and a form of birth control. However, it was found to be toxic when applied to human skin. It was still a powerful disinfectant and cleaner, however, so it came to be used to clean objects and household surfaces.

• Viagra: People know this drug today as the drug that improves male physical stamina. However, the planned purpose of sildenafil citrate, which is the active drug in Viagra, was to lower blood pressure. It was initially developed to treat a variety of cardiovascular conditions.

• Rogaine: In the 1980s, minoxidil was released under the brand name Rogaine for hypertension patients. However, there was an unexpected side effect; the patients were growing hair on their heads, as well as all over the rest of their bodies. It was then marketed as a hair regrowth solution, and it is now best known for that.

• Play-Doh: Initially, this was a wallpaper-cleaning compound. When vinyl wallpapers came around, it was rendered somewhat obsolete, since people could now just use soap and water to clean their wallpaper. However, the Kutol company, who invented the compound, found out that a nursery school was using it to make Christmas ornaments. They then removed the detergents from the formula, and Play-Doh was born.

• Latisse: This was originally produced as eye drops that were meant to treat glaucoma. However, they noticed that the patients were growing thicker and longer lashes. The company then created a compound with the same active ingredient that could be used for this purpose; Latisse was released in 2009.