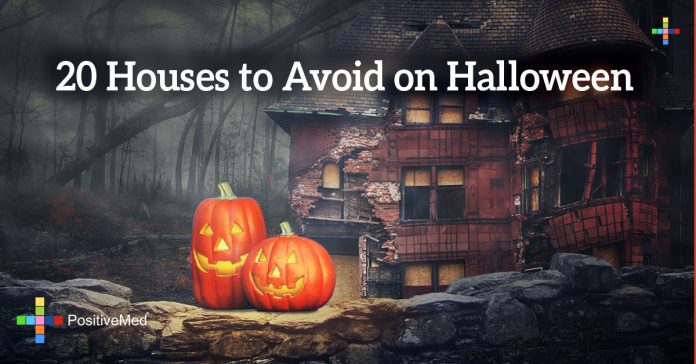 20 Houses to Avoid on Halloween

Don’t be that stupid guy that gets killed first. Think twice before you go looking for a thrill this Halloween…. (queue the spooky music).

This house is obviously cursed and will have you sprouting Latin (or some other dead language) in no time.

If it even slightly resembles a house that looks like it was the one from that slasher movie, expect a crazed copycat murderer to be waiting for you inside. Standard.

3. The House that’s watching you.

So you think this would be the perfect place for a harmless night of ghost stories with beer and flashlights? That house is counting on it.

4. The House that looks like a creepy old orphanage where there was a “mysterious” fire.

The twin girls with the white petticoats are still looking for revenge, so best leave them to it.

5. That House on the Hill

You’re already out of breath from climbing up the steep path to get to the house…. not ideal seeing as you’re going to be chased around by the chainsaw killer that lives there.

6. An Entire Village of Abandoned Houses.

So that works out as an entire village-worth of zombies to fight off. (Sorry, your chances are slim).

Somewhere in Russia via here

We all know clowns are not to be messed with. Stay home and watch “IT” with the lights on instead.

If you’re in Texas, you should know better really.

Because that’s where you’ll be found, just before the gates. With an axe sticking out of your back.

If you and your buddies decide to “split up”, wait for the inevitable, death will come shortly.

11. The Little House in the Woods

Heard a noise and one of you decides to go check it out? Did they happen to mention they’ll “be back soon”? Well, they’re not coming back. So just kick back, relax and wait. You’re next. Don’t bother running, you’ll trip over a bunch of times anyway. And even if there is a house in running distance from this one, they’re probably axe murders too.

12. Houses that could Swallow you Up

The health and safety hazards would get you even before those creatures living inside.

13. The House with the Room at the Top

See those windows at the top? Yeah, that’s the room where little Jimmy stands and lures in his victims. One by one.

14. The House with the Evil Grin

Any house with a facial expression on it should probably be avoided.

15. A House that looks perfect for a location on The Walking Dead

Yep, there’s half-eaten people locked up in the basement if you’d like to join them.

16. The House everyone knows is haunted but gets sold to some out-of-towners as a “fixer-upper”.

Do you really need candy that badly?

To see more awesome houses click on this link, Prepare to be SPOOOOOOOKED!!!