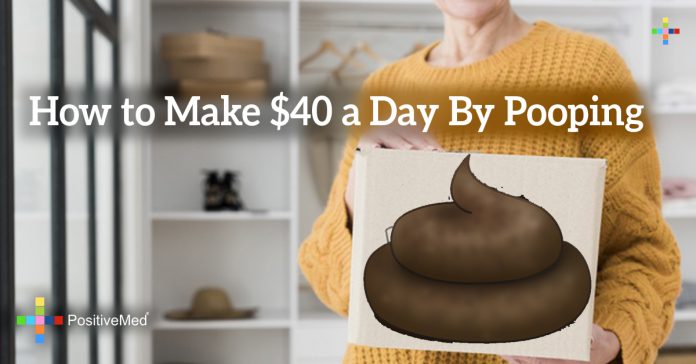 Sounds like the stuff of dreams, doesn’t it? But this is a real-life opportunity! In Medford, Massachusetts, the friendly folks at OpenBiome will compensate you $40 per, ahem, deposit. This, of course, is provided that you meet a few requirements. Namely, you must be under 50 years old and in excellent health. After filling out an exhaustive questionnaire and undergoing rigorous fecal tests and blood exams, you may be one of the privileged few who is selected to become a poop donor.

“This all sounds great,” you might say. “But…why do they need my poop?”

Well, it turns out that donating poop is a much more noble endeavor than it would initially seem. Healthy poop is chock-full of good bacteria, which are in high demand. Many people all across the country are treated with antibiotics, which rid our bodies of the nasty bacteria that cause infections. Unfortunately, antibiotics kill the good bacteria in addition to the bad. And recent studies have shown that our good intestinal bacteria is even more important than we once thought, even affecting things like our moods!

As a result of antibiotic use, a lot of patients find themselves battling nasty new intestinal bacteria after warding off the infections that landed them in the hospital in the first place. With fecal transplants, patients receive the good bacteria that battles particularly potent strains of bad bacteria, such as C. difficile. This bugger is responsible for killing 14,000 Americans a year, so making sure that patients have some sort of defense against it is a big deal.

Although the methods used to transplant fecal matter are now rather gross (Through the nose?!? Are we Egyptian mummies?), researchers are not far from designing a pill that deposits the fecal matter in our bodies.