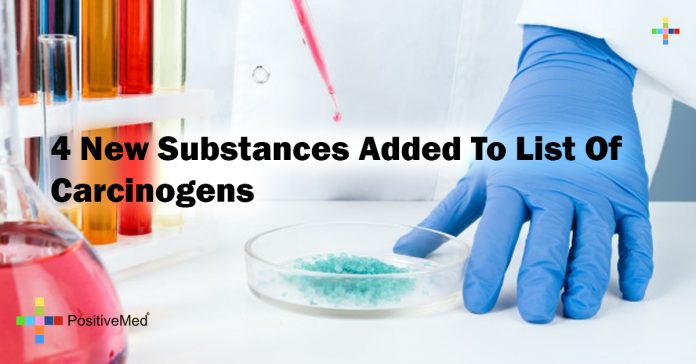 We now have even more to worry about when it comes to our health. The U.S. Department of Health and Human Services (HHS) has released a new list of carcinogens that includes one known carcinogen and three likely carcinogens. Below, you’ll find more information about each of the four harmful substances.

This chemical is the addition to the known list of carcinogens maintained by the HHS. It has been linked to increased rates of bladder cancer in people. While it is no longer produced in the U.S., over one million pounds of the substance is imported to be used in rubber chemicals, dyes, and pesticides. It is also found in tobacco smoke.
To reduce exposure to ortho-toluidine, industrial workers who may be exposed to the substance should always wear protective clothing, gloves, and respirators, in addition to limiting the amount of exposure time. Other people should reduce smoking and exposure to secondhand smoke.

This substance is a cleaning solvent whose fumes, when inhaled, have caused rodents to develop tumors in their skin, lungs, and large intestine, among other organs. It is used in dry cleaning chemicals; cleaners for optical, electrical, and metal products; and solvent sprays for asphalt production, aircraft maintenance, and the manufacture of synthetic fibers.
To reduce exposure to 1-bromopropane, industrial workers who may be exposed to the substance should always wear protective clothing, gloves, and respirators, in addition to limiting the amount of exposure time.

Pentachlorophenol is a wood preservative used to treat utility poles, fence posts, and wood pilings. Mice exposed to the chemical have developed tumors in their livers and other organs. People exposed to the chemical have also exhibited an increased risk of developing non-Hodgkin lymphoma, a blood disease. However, the studies that have demonstrated this increased risk used small participant groups, keeping this chemical on the “likely” list and not on the “known carcinogen” list.
To reduce exposure to pentachlorophenol, people should limit their contact with pentachlorophenol-treated lumber and the soil around that lumber. If required to work with the treated wood, workers should wear protective clothing, gloves, and respirators and reduce the amount of time exposed to the substance.

This substance is a flammable liquid used in coal tar, petroleum, and tobacco smoke. It is also used to make acetone and phenol, which are used in the production of plastics. When inhaled by mice, cumene has caused lung tumors and liver tumors.
To reduce exposure to cumene, people should limit their exposure to the emissions from petroleum-based fuel. People should wear protective clothing, gloves, and respirators and reduce the amount of time exposed to the substance. People should also reduce smoking and exposure to secondhand smoke.