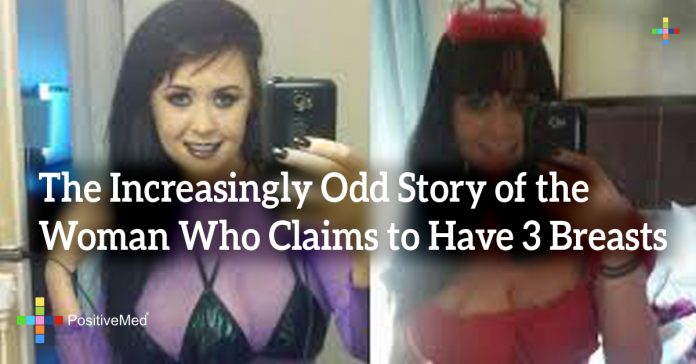 A Florida woman named Jasmine Tridevil set the internet ablaze this week, with claims that she had undergone surgery to put a third breast on her chest (it even rhymes!). Ms. Tridevil, whose name seemed oddly apropos, claimed that she had undergone the procedure because she “wanted to turn off guys.” Evidence of the third breast being a turn-off was not prevalent on the internet, where men voiced their enthusiasm for Jasmine’s new addition. Several websites even favorably compared Ms. Tridevil’s anatomy to that of a three-breasted female character in the classic film Total Recall.

In a shocking video posted online, Tridevil showed off her tri-cleavage in a revealing swimsuit and spoke fondly of her goal to star in a reality show titled “Jasmine’s Jugs.” She claimed that her main motivations were to get on MTV and win fame and fortune. Indeed, Tridevil indicated that her quest to become a three-breasts wonder was more difficult than one would think. In response to questions about the surgery itself, she stated that she had consulted over 50 plastic surgeons before finding one who would actually perform the strange surgery. The cost was $20,000.

The Tridevil story garnered attention for a number of reasons, and it wasn’t long before the experts started chiming in. Photoshop geniuses started to point out the obvious. Tridevil’s photos were all taken by her. The lighting conditions were dim, and although the effect was convincing, many people were not fooled.

Then the plastic surgeons weighed in, essentially destroying all hopes and dreams (sorry, boys!) that Tridevil’s tatas were truly triple. Apparently, creating a third breasts is not as easy as one would think. Tridevil’s claim that she underwent just one surgery debunked the scenario for medical experts, who pointed out that she would have had to undergo several surgeries to prime her skin to stretch. They also noted that the effect Tridevil had achieved, which appeared to be an independently swinging third breast, would have been virtually impossible. If the surgery had truly taken place, Ms. Tridevil would have ended up with a third breasts that sat in perfect harmony with her regular cleavage. Then there were her shady internet accounts, which also raised hoax suspicions.

Yep, it would appear that the internet has deceived us once again. Here’s hoping that the next triple-breasted freak has some more street cred than Jasmine Tridevil! Or not…the whole thing is kind of creepy.