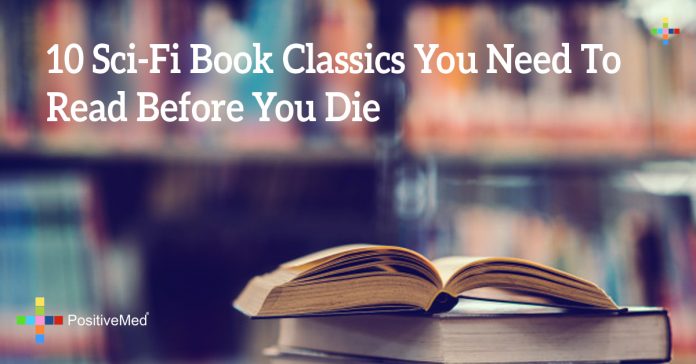 Depicting electric sheep, mysterious monoliths, and alien life forms, science-fiction is more visionary than any other genre of fiction. Here’s a glimpse into the future as rendered by talented writer’s, a guide on steering the USS Enterprise and savoring Pan-Galactic Gargleblasters without fear.

1. Darth Bane 1: Path of Destruction by Drew Karpyshyn
Star Wars novelizations have expanded the saga of the Jedi struggle beyond unlikely sibling relationships and complaining droids. This trilogy retells how one dark lord united the Sith Order.

2. The Hitchhiker’s Guide to the Galaxy by Douglas Adams
The story of how a millions readers followed a man in a bathrobe across the stars. Discover Arthur Dent and his unlikely friends. They include intimate ear contact with a fish, passage on an improbable starship, and a paranoid android.

3. Ender’s Game by Orson Scott Card
A story about a young Napoleon in the making, this classic science-fiction novel shows how a young boy is trained to fight an oncoming wave of terrifying aliens.

4. The Martian Chronicles by Ray Bradbury
A not so subtle allegorical tale demonstrating man’s habitual talent for destroying indigenous life. The role of the Native American is played by bald Martians, and the part of the human invader is played by people.

6. Enterprise: The First Adventure by Vonda McIntyre
Captain Kirk and the crew of the USS Enterprise learn to steer the great ship for the first time in this story of how the characters first united. Join them as they meet flying aliens on a vast construct between the stars.

7. I, Robot by Isaac Asimov
The inevitable battle that pits humanity against intelligent household appliances is not handled in this story. Instead, I, Robot is an account of the three laws of robotics. Interlinked stories illustrates the coming of the self-aware robot.

8. 2001: A Space Odyssey by Arthur C. Clarke
Black monoliths, angry apes, and babies in space bubbles somehow come together in this story of super-advanced aliens. The final ingredient in the story is the HAL 9000 computer, a not so user-friendly A.I.

9. Do Androids Dream of Electric Sheep by Philip K. Dick

Set after a terrible World War, humanity creates androids versions of animals and humans. These androids take umbrage at their short life span and go on the run. The inspiration for the movie, Blade Runner.

In search of utopia, a 19th century genius invents a time machine to voyage into the future. The journey consists of his pervy views of mannequins changing clothes over the decades. The journey also includes a harrowing trip that takes him 800,000 years into a dystopian future where underground “Morlocks” rule what remains of humanity.