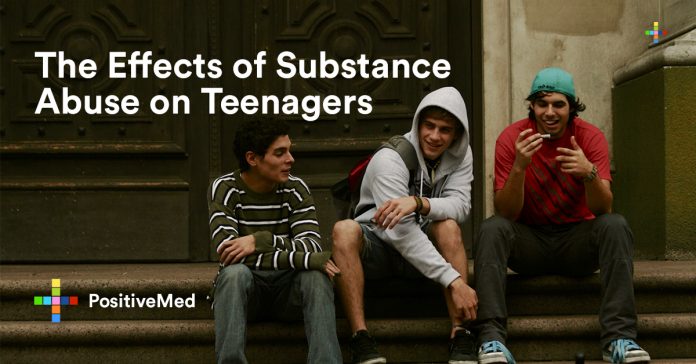 Many teenagers engage in risky behavior by nature. Whether peer pressure brings a teenager to try drugs or alcohol, or a teen begins using a substance because they want to seem older, substance abuse is prevalent among teenagers throughout the United States. While trying to drink at a party or smoking marijuana a few times with friends doesn’t indicate a problem, continued use can quickly turn into a substance abuse issue. Teenagers become addicted to substances when they can no longer control the use, and the effects of substance abuse on teenagers can be significant.

Substance Abuse Can Impact the Overall Health of Teenagers

The health effects of substance abuse at an early age can last a lifetime. Some teenagers who abuse drugs or alcohol at a young age have a big problem with addiction as they get older. Using substances at any age can cause damage to the body. Teenagers are at an increased risk of brain damage from abusing substances, a health problem that is not reversible.

Teenagers that are Addicted to Substances Exhibit Emotional Problems

Teenagers can be unpredictable and emotional as they try to navigate intricacies of growing up. When substances are being abused, this can hide emotional problems. In addition, the use of addictive substances can cause emotional issues to escalate. If your teenager has become more sullen, doesn’t engage with the family, or is otherwise not acting like their normal self, it is probably time for a discussion to see what is going on. While not all emotional trouble indicates a substance abuse problem, it is necessary to talk to your teenager when they are acting withdrawn.

Social Problems with Peers or Trouble in School is Often Present

Teenagers who are engaging in substance abuse with drugs or alcohol tend to struggle with peer relationships. In addition, you may notice that your teenager is doing worse in school both academically and behaviorally. Substance abuse can cause your teenager to act out or become violent, even when they are normally mild-mannered. Addiction is an illness where the symptoms caused by withdrawal are relieved when the substance is used again. Many teenagers who have limited monetary resources will begin stealing in order to get the drugs or alcohol they need to avoid withdrawal symptoms.

Addiction Early On Leads to Relapse as an Adult

An adolescent who tries drugs or alcohol and is unable to stop is more likely to have addiction issues as an adult. Even teenagers who get treatment for addiction will need to focus on their sobriety in later years to avoid relapsing. There is a direct correlation between how early an individual struggles with addiction in life and how difficult it is to remain sober as an adult.

Engaging in unprotected or otherwise risky sex is common among teenagers who are abusing drugs or alcohol. Teenagers who are addicted to substances have higher rates of STDs, unwanted pregnancies and experience sexual assault. A decrease in inhibitions because of substance abuse also leads to dangerous sexual activities with strangers.

Substance Abuse Can Cause Learning Difficulties in School

Both long and short-term memory can be damaged when a teenager abuses drugs. This can lead to problems learning in school, and you may see that your teenager begins to do poorly in school. With heavy drug use, it is likely that you will see impairment when your teenager is at home as well. Drug abuse can cause brain damage, as well as brain shrinkage. This can cause amnesia, difficulty remembering things, and trouble with basic reasoning skills. Teenagers who are struggling with the effects of substance abuse often become less social and more withdrawn.

Teenagers Who Abuse Substances Have a Higher Rate of Car Accidents

Alcohol or drug abuse has both short and long-term effects on the body. On an already impulsive, growing teenager, the effects can be exacerbated. Regular substance abuse can lead to permanent damage to the brain as well as the potential to have a harder time with addiction throughout life. When a teenager is abusing substances, you may notice a big change in their personality. They may become more withdrawn, or want to go out constantly. Their attitude may shift, and their grades may begin to fall. While some behaviors are normal for teenagers, significant changes in personality should be a warning sign to parents.