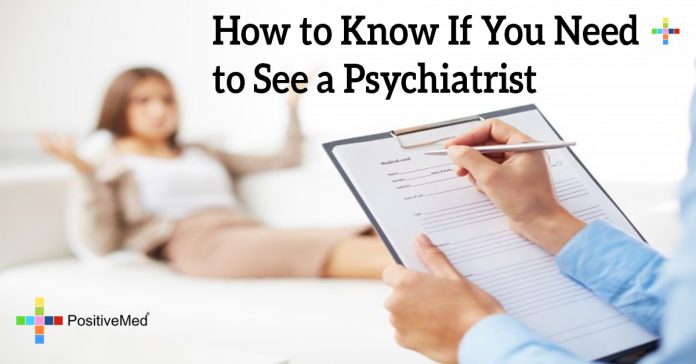 How to Know If You Need to See a Psychiatrist

If someone has a broken arm or a bad cold, they go to the doctor for help and to feel better, right? Well, sometimes people have problems that cannot be seen to as easily as a physical injury or illness. Sometimes, the problem is internal and they see an enterologist. Sometimes still, there are issues with emotions or thoughts and that’s when to see a therapist

Therapists are experts in human behavior and know the ways that people think, feel, and act. They can help people, including children, understand their feelings, resolve problems, and cope with their situations. A therapist is there to help people think and do better than they have been and do this primarily by conversing with their patients.

What follows is a list of the more common reasons to make an appointment. Remember, if you have one of these problems or suspect that you do – you are not alone and it’s okay to seek help.

If you suffer from any eating disorders such as anorexia nervosa, food addiction, bulimia, purging or binging, or anything else that is an unhealthy association with food. An eating disorder can be triggered by a stressful situation or a constant state that’s ingrained to your everyday activities. In some cases, hospitalization is required but a psychiatrist visit should be the first thing you do.

Depression affects millions of people and can be dangerous to not only yourself, but everyone around you. Depression affects people regardless of age, gender, and physical means or ability. Depression is not something a person can control, least of all without help which is typically therapy and medication. Pay attention to the symptoms of depression and make an appointment as soon as possible.

One of the biggest problems when it comes to seeing a psych is anxiety. This is typically known as Generalized Anxiety Disorder or GAD. People who have GAD don’t know what steps to take to stop an anxiety cycle and it tends to feel out of control. In the US today, there is an estimated seven million adults who have this disorder.

Irrational fears, or phobias, can hinder a person who is suffering from them to the point where they are incapacitated. In many cases, the fears that are considered irrational to most are the most rational to the person who has them. Making an appointment will allow you to gain control over the fear. In fact, most people who seek treatment are able to overcome them in time.

This condition can be dangerous, in some cases, to you and to others. Medication is always required and is not something you can get from a psychologist. However, with a psychiatrist you can get therapy, medication, knowledge about yourself and your condition.