How Digestion Works: What Happens to Food After You Eat it? 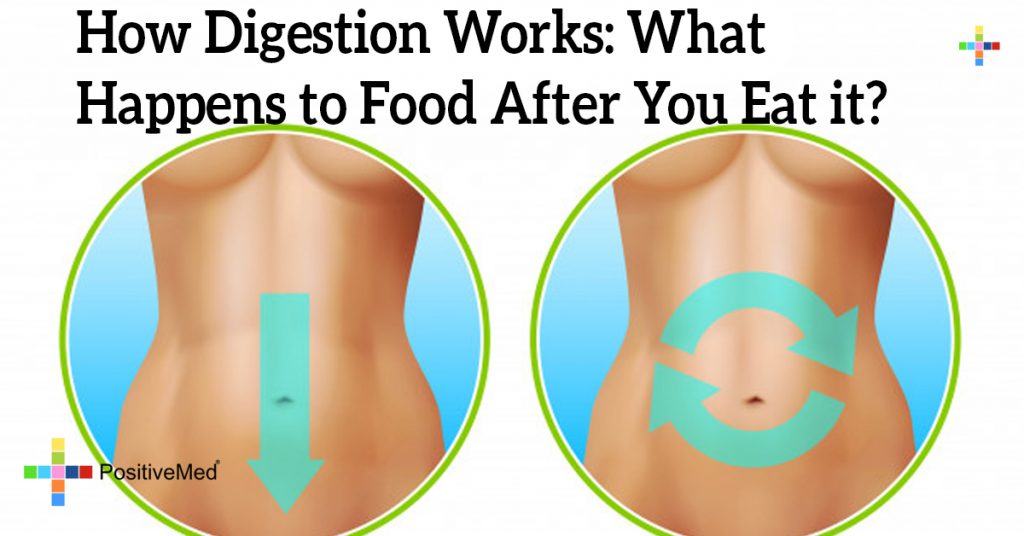 How Digestion Works: What Happens to Food After You Eat it?

Different foods have different effects on your body, it’s good to know what happens during the digestive process. It will really make a difference in how you make your food choices! I love this poster, I want to hang it in my kitchen!

How Digestion Works- What Happens When You Chew

How food is digested is made up of a very complex system that provides the fuel and power for your body. The body cannot use food that is eaten until it is broken down into very small molecules like protein, vitamins, carbohydrates, and fats. Only then can the body absorb these molecules and process them through the blood, liver, kidneys, and the entire digestive system, working to separate the good parts from the bad. When you chew food, saliva begins breaking down food; which is why it is so important to chew your food well.

Chewing food properly is something that few of us do, and it can have wide ranging health benefits. When you eat food, the first stage to digesting it is the process of chewing it down and breaking it up; failure to do this properly – because you’ve been in a rush, or because you were talking or eating in front of the TV, is not only impolite but also a fast track to a range of health difficulties. Chewing breaks the food down from large particles into smaller particles that are more easily digested. This also makes it easier for the intestines to absorb nutrients and energy from the food particles as they pass through, while also preventing improperly digested food from entering your blood and causing a wide range of adverse effects to your health.

The longer you chew, the more time it will take you to finish a meal, and research shows that eating slowly can help you to eat less and, ultimately, to avoid weight gain and even lose weight. For example, chewing your food twice as long as you normally would will instantly help you control your portion sizes, which naturally decreases calorie consumption.

Saliva contains digestive enzymes, so the longer you chew, the more time these enzymes have to start breaking down your food, making digestion easier on your stomach and small intestine. One of these enzymes is lingual lipase, an enzyme that helps break down fats, for example. Saliva also helps to lubricate your food so it’s easier on your esophagus.

The chewing process pre-digests your food into small pieces and partially liquefies it, making it easier to digest. Digestion is actually a very demanding task for your body, requiring a great deal of energy, especially if forced to digest improperly chewed food. Chewing properly allows your stomach to work more efficiently and break down your food faster.

The bones holding your teeth get a ‘workout’ when you chew, helping to keep them strong. The saliva produced while chewing is also beneficial, helping to clear food particles from your mouth and wash away bacteria so there may be less plaque buildup and tooth decay.

When large particles of improperly chewed food enter your stomach, it may remain undigested when it enters your intestines. There bacteria will begin to break it down, or in other words it will start to putrefy, potentially leading to gas and bloating, diarrhea, constipation, abdominal pain, cramping, and other digestive problems.

The stomach is a very muscular organ that produces strong acid killing bad bacteria, breaking food down while mixing it together. If the valve of the stomach doesn’t close properly when food is being processed, some acid can leak into the esophagus causing heartburn.

The human body obtains the energy and nutrients it needs from food. However, our cells cannot absorb these nutritional benefits until the food has been digested – which means processed and converted into a useable form. Thus digestion is the complex process of breaking down food molecules into energy and other useful components, which can then be absorbed into the bloodstream and distributed throughout the body to maintain good health. Food remnants which are not absorbed during the digestion process are expelled as waste in the form of feces.

Digestion involves the mixing of food, its movement through the digestive tract, and the chemical breakdown of the large molecules of food into smaller molecules. Digestion begins in the mouth, when we chew and swallow, and is completed in the small intestine. The chemical process varies somewhat for different kinds of food.

The digestion of food in humans takes place in the gastrointestinal tract – a series of hollow organs (mouth, esophagus, stomach, large and small intestines) connected to form a long tube of about 24 feet in length which extends from the mouth to the anus. It is also referred to as the GI Tract, the alimentary canal, the digestive tract, or the gut.

The large, hollow organs of the digestive system contain muscle that enables their walls to move. The movement of organ walls can propel food and liquid and also can mix the contents within each organ. Typical movement of the esophagus, stomach, and intestines is called peristalsis. The action of peristalsis looks like an ocean wave moving through the muscle. The muscle of the organ produces a narrowing and then propels the narrowed portion slowly down the length of the organ. These waves of narrowing push the food and fluid in front of them through each hollow organ.

The first major muscle movement occurs when food or liquid is swallowed. Although we are able to start swallowing by choice, once the swallow begins, it becomes involuntary and proceeds under the control of the nerves.

From the mouth it goes into the esophagus, then into the stomach from where it enters the small intestine. Most, if not all, nutrients are absorbed in the stomach and small intestine. The remaining water and waste products then pass into the large intestine (composed of the cecum, colon and rectum) from where it leaves the body via the anus. Other organs which contribute to healthy digestion include the liver, the pancreas, and the gallbladder. A number of important digestive hormones and digestive enzymes help to regulate digestion, especially in the the upper gastrointestinal tract. The movement of food through the main digestive tubes (esophagus, small intestine, and large intestine) is maintained by a series of muscular contractions called peristalsis. Several muscular valves control the passage of food and prevent it from moving backwards. On average, it takes about 40-45 hours for food remnants to pass through the entire digestive tract.

Bad eating habits, like over-consumption of refined carbs, or lack of dietary fiber, can cause constipation, indigestion, non-ulcer dyspepsia, or can lead to certain specific digestion-related conditions such as diverticulitis and Irritable Bowel Syndrome (IBS), or nutritional deficiencies. Viral infections can lead to diarrhea and gastroenteritis for which specific anti-diarrhea dietary treatment may be urgently required. Lastly, ingested food toxins can cause a number of unpleasant digestive complaints or even food poisoning.

How Digestion Works: What Happens to Food After You Eat it?
[Last Updated on June 10th 2014]
Edited By Stephanie Dawson

What Happens to Food After You Eat It, PositiveMed

PrevPreviousHOW TO MASSIVELY INCREASE YOUR ENERGY…GUARANTEED!
NextWhat You Need to Know about Appendix and AppendicitisNext