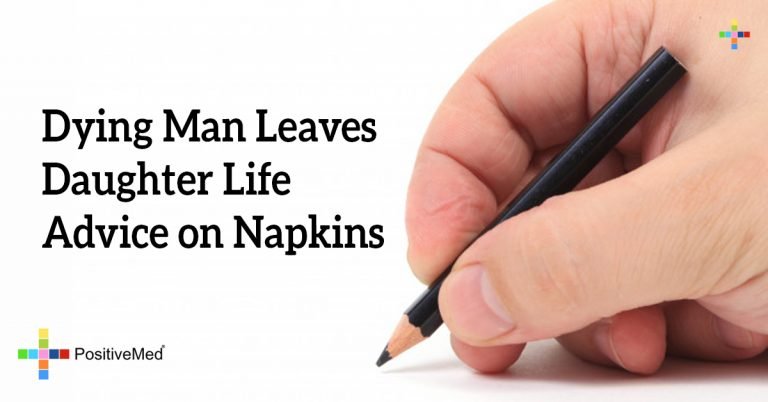 There is often a beautiful bond that a father and daughter share. Here we have a classic example of the tender love shared by a daughter-father duo.
This story is about a father named Garth Callaghan, 44, and his daughter Emma from Glen Allen, Virginia, he has cancer. He has been writing notes for his daughter every day on napkins in her lunchbox until she completes high school.

Mr. Callaghan has been writing short notes for his 14 year-old daughter Emma since he was diagnosed with cancer. Mr. Callaghan has been diagnosed twice with kidney cancer and once with prostate cancer. After much thought he decided that if he fails the battle, which is likely, he would not want his daughter to be without his advice. He is has a goal of 800 notes in mind and writes on simple white napkins. The napkins are kept in her lunch box in case he does not make it to her graduation.
Writing notes has been a tradition between this duo, it started when he was working in a busy sales job when Emma was in elementary school and he did not see her much. He wanted his daughter to know that she is special to him and is always on his mind.

His notes are made up with stars, hearts, and simple phrases. With the passage of years the notes have turned into piece of advice and encouragement for exam days. By the time she was 8 she had come to expect notes from her dad in her lunchbox. Mr. Callaghan told the press that sometimes she would peep into her lunchbox before he had put a note inside and she would ask where it was, that was when he realized the notes matter a lot to her.

In September 2013 Mr. Callaghan started posting his notes on Facebook and blog to motivate and inspire other parents to develop a special connection with their children.

His wife Lissa says he has also taken over preparing Emma’s lunch in an attempt to help her eat healthier. She has good feelings about her daughter’s connection to her father. She said her husband was diagnosed with cancer in 2011 and his urge to write down his advice became stronger because if he passes away the notes will be left with his daughter to remember him.
The cancerous tumor was successfully removed once but he has been diagnosed with cancer twice since then and his doctors have given him 5 years to live.

“Today, I am NED – No Evidence of Disease,” he said. “I still likely have cancer, but we can’t see it. That’s the irony. I am actually ok, and I feel well.” He added that Emma saves some of his notes in her composition book and sends back some notes of her own. A recent note sent by her read “An arrow can only be shot by pulling it backwards, so when life is dragging you back, it means it’s going to launch you into something awesome.”

Today Emma tries not to look at the note until recess. It helps her have something to look forward to.