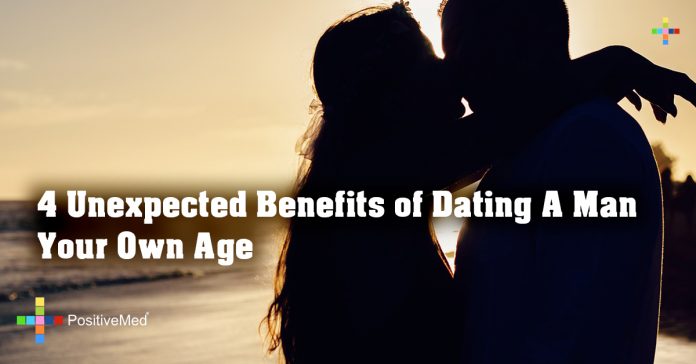 4 Unexpected Benefits of Dating A Man Your Own Age

When I was 28 years old, I had just ended a long-term relationship when I met a man who was in his mid 50’s. I had never dated an older man before, and despite my hesitancy, I thought I’d at least go out on a date with him. I viewed him as being established in his career and financially better off than most of the men my age. He was also a take charge sort of guy, which was nice because I was tired of making decisions all of the time. I went on that date and many more for the next 6 months. He was very attentive, planned nice weekend get-aways, and seemed to know what women want. In the end, though, I chose to marry a man that is closer to my age. With all the great qualities that the older man possessed, I found out that I was too independent of a female to let a man have all the control in the relationship. Plus, dating a man your own age means a more equal partnership in the long run, a lasting friendship between contemporaries, a more adventurous love life, and overall better communication.

Often times, women enjoy dating older men because they think they want the man to control most aspects in the relationship. It may seem appealing to let someone else make all the decisions while you sit back and enjoy yourself, but that’s not all it’s cracked up to be. Older men can exert too much power and control and leave you feeling trapped in a cage. On the other hand, if you date a man your same age, this situation is less likely to occur. You form more of a partnership instead of a father-daughter relationship. You make huge life decisions together instead of one person deciding everything for your future.

Marriages that last until death all have one thing in common: they are each other’s best friend. This leads to mutual respect for one another and you trust the other with your life. A best friend marriage is better than others when you throw in the aspect of children too. Children are major stressors to relationships, so you need a strong foundation so that you don’t fall apart. Older men may not view a younger woman in this way, which could lead to a rebellion on the woman’s part and the relationship deteriorating.

RELATED ARTICLE: 5 Things You Can Learn About Love From Dating Older Men!

More Pizzazz in the Bedroom

It is a myth that older men know what younger women want when in between the sheets. A man your age can know just as much, and in addition have more stamina. A man your own age may also be more open minded to explore your sexuality, whereas an older man might see anything besides a traditional sex life as too weird. Therefore, with more energy and openness, you could go down a very happy road with someone your own age.

Your life experiences are what shape your personality, beliefs, and opinions. With each passing decade, there comes a new generation with different twists on their personalities, beliefs, and opinions. So, being with someone your own age is not just a matter of having things in common to talk about, it’s having shared ideologies and someone who gets where you’re coming from. Furthermore, it’s nice to be with someone who you can go to concerts, movies, sporting events, etc. An older man may not enjoy any of the things a younger woman likes to do.

In conclusion, money and stability are certainly huge factors when choosing a mate, and that’s why women are often times attracted to an older man. According to an article called, “When It Comes to Dating, Do Age Differences Matter?,” the author lists study after study that state that women are searching for a stable, older man. Money can be a fleeting thing, though, and if you strip that away, then what are you left with? Research from the Austin Institute in the article, “Ask a Data Scientist-Age Difference Between Couples,” states that only 8.3% of men actually end up married to their younger girlfriends. Therefore, your best bet may just be with a man around your age. If you choose a man your own age, you can still have great finances plus a best friend with whom to create a lifetime of experiences.