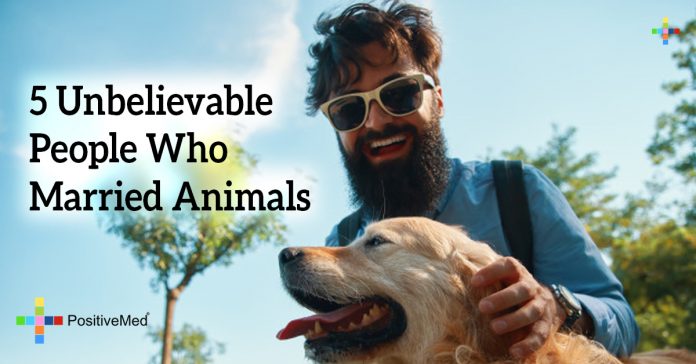 Most of us love our pets and it’s good to love them, but sometimes love for a pet becomes obsession. Have you ever thought of a person marrying his/her pet? Marriage is a beautiful institution, however, what would your reaction be to know about people who married their pets?

1. Teenager who married a flirty cow
In 2010, an 18 year-old Balinese teenager Ngurah Alit was caught making love with a cow. He claimed the cow flirted with him. Consequently in June 2010 the man was forced to marry the cow in a wedding ceremony which was a part of Pecaruan ritual. Pecaruan is a ceremony which involves cleansing the village of the unholy act of a man mating with a cow. Later the new bride (read cow) drowned in the ocean.

2. Woman who married a dolphin
In December of 2005, millionaire Sharon Tendler, 41, married her love in life, a dolphin named Cindy at an Israeli resort. She met the dolphin 15 years earlier at the same resort. She loved the dolphin and came at least three times a year to spend time with her love. On December 28 she decided to marry Cindy. She kissed her in front of the crowd and after the marriage Tendler was tossed into the water to spend time with her. Cindy died on June 18th 2006.

3. Man who married his cat
In 2010 a 39 year-old German man named Uwe Mitzscherlich had a cat named Cecilia who was suffering from asthma and had been told by doctors she did not have much time to live. The man decided to marry his cat after hearing the sad news. Marriage to an animal is illegal in Germany. A guest, actress Christin-Maria Lohri, asked the man to say, “I do,” and Cecilia to meow before pronouncing them wedded man and cat.

4. Man who married his dog
In December of 2010, an Australian man named Joseph Guiso married his best friend, a 5 year-old Labrador. The man and the best friend tied the knot at Toowoomba’s Laurel Bank Park somewhere in Australia. Interestingly some 30 friends and family members made it to their wedding ceremony. Guiso considers himself religious and felt guilty about the fact that he is staying with honey (his Labrador) without tying the knot. He explained that it is about pure love, not [email protected]

5. Two Indian girls married frogs
In January of 2009, two 7 year-old girls married two frogs in a bizarre ritual. The wedding ceremony took place to prevent the outbreak of mysterious diseases in their village in India. The two girls were dressed in traditional Indian outfits which included a sari and gold jewelry. They married the ‘frog princes’ in separate ceremonies in different temples. Thousands of villagers came to witness the weddings. The villagers who belonged to the Western part of the village acted as relatives of the brides while those who belonged to the Eastern part of the village acted as relatives of the grooms.