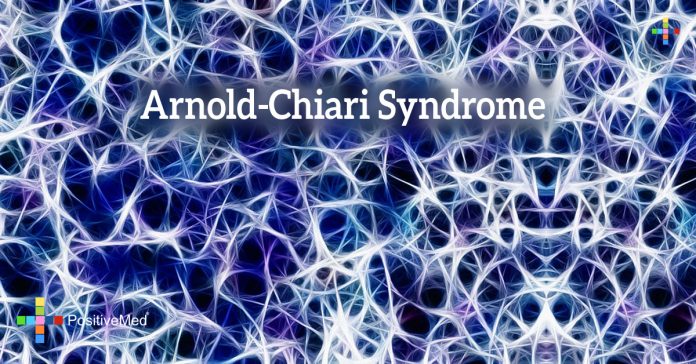 This malformation is a variable defect in the formation of the brain stem often associated with hydrocephaly, or accumulation of liquid in the encephalic cavity. It can cause a protuberance or bulge in any part of the cerebellum, the brain structure involved in motor coordination. The Arnold-Chiari malformation has recently been defined by medical associations as any congenital malformations that displace the brain stem and the cerebellum toward the spinal cavity. In the case of hydrocephaly it appears to block circulation of cerebrospinal fluid because it narrows the orifices of the fourth ventricle.

There are differences in manifestations of symptoms and their variety, for that reason its classified by experts the following way:

Type 1. When individual’s cerebellar tonsils herniate into the foramen magnum without involving the brain stem, blocking the passage of cerebrospinal fluid into the cervical spinal canal. The symptoms of Chiari I malformation may first appear in adolescence or adulthood. Sometimes discovery is casual.   Type 2. Involves the extent of cerebellum and brain stem tissue. Also, the cerebellar vermis ( the nerve tissue connecting the two halves of the cerebellum) may be partially or completely absent. Type II is usually accompanied by a myelomeningocele – a type of bifida that occurs when the spinal canal and spinal cord do not close before birth , causing the spinal cord and membrane to remain open, exposing part of the cerebral tissue externally. Myelomeningocele usually produces partial or complete paralysis of the area below the opening cord.

Not everyone affected by Chiari malformation experiences symptoms, often the malformation is discovered by chance during an MRI for other reasons. Patients with symptomatic Chiari malformation may complain of neck pain, balance problems, muscle weakness, numbness or other abnormal feelings in the arms or legs, dizziness, vision problems, difficulty swallowing, ringing in the ears, hearing loss, nausea, insomnia, depression, or headache that worsens when coughing. Symptoms may be different for some people depending on increase of cerebrospinal fluid and the resulting pressure on nerve tissue. Adolescents and adults with Chiari malformation who have no symptoms initially may present them with passing years. In childhood the symptoms of Chiari malformation consist of difficulty swallowing, irritability when feeding, excessive drooling, nausea, weakness of the upper limbs, neck stiffness, breathing problems, developmental delays, and an inability to gain weight. In children it may be accompanied by snoring during sleep.