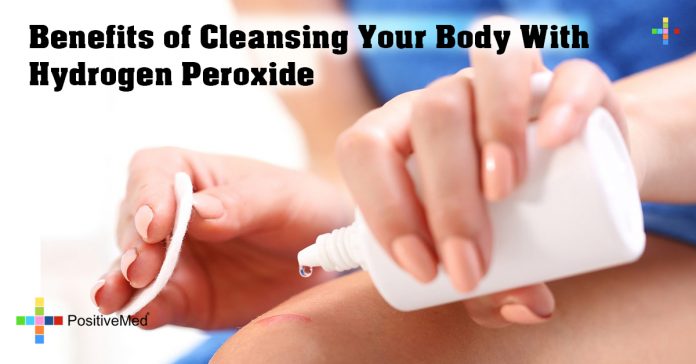 What is hydrogen peroxide, and why is it a good product to use for cleaning your body? It’s a mild antiseptic that oxidizes or kills organic matter like bacteria, yet is gentle on the skin. The chemical formula is H2O2 or water that has an extra oxygen atom for each molecule.

Strong solutions of hydrogen peroxide can be used to dye hair and sanitize medical equipment. The kind we’re talking about is the brown bottle of 3 percent hydrogen peroxide that you can buy in a drug store. It’s weak enough to be safe for skin while still eliminating viruses, bacteria, and parasites.

Top 6 Ways of Cleaning Your Body With Hydrogen Peroxide

Hydrogen peroxide works just as well as any of the minty-flavored mouthwashes and costs a whole lot less. Dilute it half-and-half with water and rinse after brushing or flossing. A natural way of whitening and disinfecting your teeth is to put a small mound of baking soda in your palm, wet it with a few drops of hydrogen peroxide and dip your toothbrush in it.

Hydrogen peroxide is a good substance to use for cleaning a wound when applied immediately after sustaining an injury. It will destroy bacteria and any organic matter in the wound while it cleans away the dirt. Adding half a bottle of 3 percent hydrogen peroxide to your bath will also help eliminate any skin infection.

RELATED ARTICLE: Why is Flossing So Important?

Acne starts with clogged pores and a buildup of oil and sebum on the skin, but those blotchy red patches that swell and spread are fueled by bacteria. Using diluted hydrogen peroxide on stubborn acne will help get rid of it faster. Wash your face with soap and water, dry off thoroughly and apply 3 percent hydrogen peroxide to problem areas. Be sure to moisturize afterward, because this treatment will dry your skin.

Add two cups of hydrogen peroxide to a foot tub of hot water and soak your feet in it for 20 minutes, drying them well afterward. You can include a few drops of essential oil in the footbath for a pleasant scent, and adding a half-cup of Epsom salts will increase the disinfectant power of the soak.

There are three main ways that hydrogen peroxide helps your ears: removing wax, fighting infection and protecting against “swimmer’s ear.” A couple of drops in your ear, followed a few minutes later by a couple of drops of olive oil, will remove wax buildup. Six to eight drops in each ear will help clear up an ear infection, and a few drops mixed half-and-half with vinegar helps prevent swimming-related ear infections.

You can make an effective nasal spray using equal parts of hydrogen peroxide and water. One part of hydrogen peroxide mixed with 4 parts distilled water can also be used in a neti pot to flush the sinus membranes. The benefit is that, in addition to clearing mucus, the solution will disinfect your sinuses.

These remedies are all good ways to disinfect your body and help it stay healthy. Hydrogen peroxide can also help you heal when it comes to acne, foot fungus, ear infections, and stuffy noses. Remember that all of these suggestions are based on using 3 percent hydrogen peroxide. This is a weak enough solution that it will fight infection without harming the body. Any time you use the product in your sinuses, be sure and used only distilled water to prevent complications