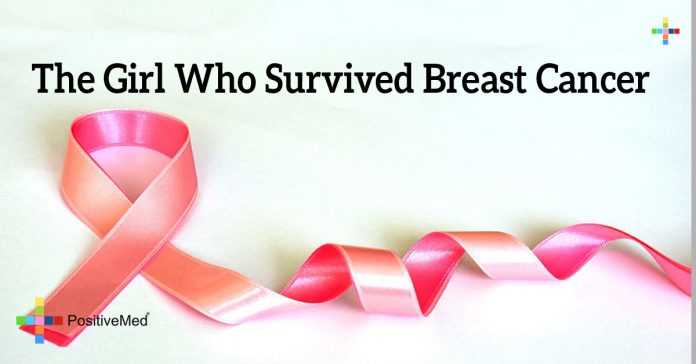 The Girl Who Survived Breast Cancer

There was a girl named Andrea who believed in living life to the fullest and fully enjoyed every moment of her life.

One Monday morning she was found sitting in an empty office at their financial firm by her co-worker Jim. Jim noticed she was red-eyed and assumed she might have had a bad weekend, maybe a fight her boyfriend or a grand weekend plan that failed, but the fact was that she had gotten the results from a biopsy of the lump in her left breast and it read cancer, when she told Jim about it, he barely said anything and there was a long silence between them. Jim then broke the silence and asked, “Do you want to get a cup of coffee?”

She said yes to feeling a bit normal as strong coffee was their answer to botched assignments, long meetings, and generally crummy days. She was a 23 year old girl and until now the things that consumed her mind were worrying about how to handle the senior managers, which shoes or clothes to buy, and against which team her favorite rugby team was scheduled to play the next match. Now she found herself thinking about the biopsy report that she got a few moments ago.

It was her boyfriend Mark who had first felt the lump and assumed it would go away on its own like all other bruises and bumps. After three months she told her doctor about this, there for a more pressing concern, seasonal allergies for which she went to her doctor. Her doctor was not overly concerned about the lump but referred her to a radiologist anyway.

The report suggested it to be an aggressive Stage 2 cancer. Nevertheless, the tumor (all 2.8 centimeters of it) was removed and she was left to the loving care of her parents and Mark. While her friends enjoyed life in all possible ways she stayed at home. She was wiped out by the chemo and had no energy.

After a few rounds of radiation the cancer was gone and she was then supposed to live life normally, however, she still could not get things she wanted, she had been asking her boss for a transfer but that did not happen, a basketball tournament for her team was scheduled the next month but she could not participate in that.

Cancer had made her lonely. She would panic with cancer talk as it bombarded her with life choices she was not ready to make. She was left bruised and hairless, but she did not give up hope and thought no matter how banged up it was, it was still her own body, and with all the courage she could muster played her first post-cancer rugby game five months after her final treatment. Her teammates thought she was crazy but she opted to play that game with some extra padding over her chest. She did not stop there, she pushed her body further biking 220 miles in the Young Survival Coalition’s Tour de Pink from Philadelphia to Washington. She had an option of the “poop out” bus, that riders could take for the last stretch, but she decided against it and completed the tour biking.

It would have been easy for her to say goodbye to life or to spend her life with the mindset that she was a cancer patient, but she decided on something else. She never gave away hope and decided to live life to the fullest, to do what she always wanted to do and to enjoy each and every moment that life had to offer her.