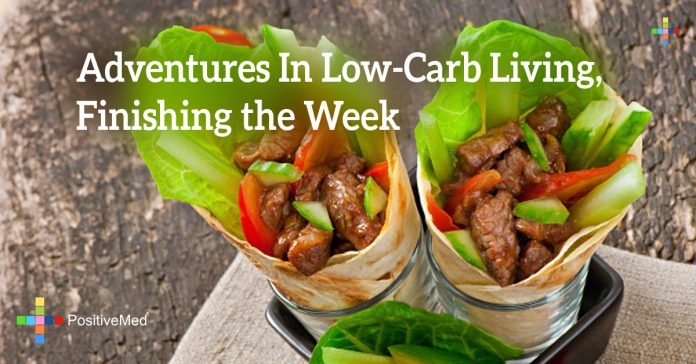 As an experiment this has gone well, I have noticed increased energy although I had a virus, was not flat down for as long as usual, also my lower extremity edema is greatly decreased. I think I will continue to do this for a while longer at least, but post on it once a week or so unless something amazing happens.

To me it felt like it was just time to give low-carb a try, my mom does it, my son is doing it as part of his training, it seems everywhere I turn I hear something about it so it was a “what the heck its for science,” type thing.

Not everyone knows this, I write about health on almost a daily basis after all, but I am a big girl. I had a hysterectomy when I was 24 and gained 49 pounds in 3 months, for the next 17 years I stayed within 10 pounds of that new weight, then I had my work injury that ruined my hip, so all of a sudden I was taking steroids and doing my nursing from behind a desk, big difference. I rapidly gained almost 30 pounds right away, then another 10 over the next year.

I am not lazy, I exercise as much as my broken body allows, I do not overeat, I average 1200 calories a day, or did, before last week. My doctor thought I was lying, he said it was impossible for anyone to eat as healthy as I do and not lose weight, he was wrong, it IS possible, obviously. I have been on Weight Watchers (too close to the way I already eat, made no difference), Slim Fast, Dr. prescribed medications, and many other things.

I wanted to have the lap band surgery, when I first tried I wasn’t big enough. The second time I asked they had lowered their standards and I had gained weight post-injury, so I did everything, had the preliminary appointments, they told me I would have to quit smoking and drinking diet soda and beer, nothing carbonated. My surgery was scheduled for November, I quit all that stuff in October, then the day before surgery my insurance said I had to quit smoking for 6 months before, which was news to everyone, including the surgeon. I didn’t get it. By the time the 6 months had come around I had been diagnosed with Fibromyalgia and no longer had insurance. That was 18 months ago.

I am not one of those girls (or women, I’m 45) who places their self-value on a number, I think I am awesome, but I must admit when dating someone doesn’t work out I always wonder if my size was a factor, people can be very shallow… anyway, if I post a weight loss I don’t want people thinking I am ruled by a scale, once you get to a certain point its very good for your joints to have less to carry around…

That being said, I survived the first leg of the journey, on my designated cheat night I was all set to enjoy the foods I had scratched off my list, I had a small bagel and 2 cookies my daughter baked then I was over it. The only time I have really been tempted off-course was by a baked potato, you can bet I will make one next cheat night!

Unless I make some new and interesting food discovery I won’t go on about menus, suffice it to say I am eating at least one cup of vegetables, 2 if its greens, with every meal and I am always satisfied. If I have an unshakable craving I have discovered a teaspoon of peanut butter (I have all natural dark chocolate peanut butter) fixes the craving for about 1 net carbohydrate, not bad at all! Usually when I realize it’s been hours since I ate I start preparing food, THEN get hungry. As of today I am down 6 pounds, that is a lot for one week, but I expect it will level off. Love peace and hugs …