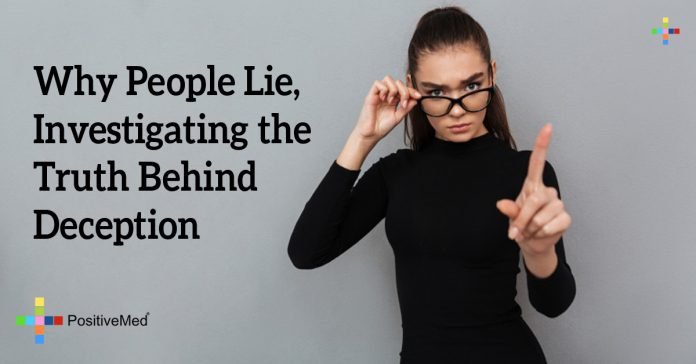 Why People Lie, Investigating the Truth Behind Deception
By PositiiveMed-Team
Edited By: Stephanie Dawson

We all know lying is wrong, yet we lie in circumstances when it comes to avoiding trouble, saving face in front of the boss, or to spare someone’s feelings. Telling harmless half-truths is common among women, most of them tend to lie about money. Its a natural human trait to tell tales. You can manipulate the way others see you. People stretch the truth from time to time and mislead people using deception. Common points of deception:

It may sound like “Gosh, I never got the party invitation!” “Sorry I’m late, there was a huge pile-up on the way.”
Self-preservation is the most common reason for people to lie. It may result out of instinct, but people who start covering up their errors frequently may feel they have permission to be irresponsible. Keeping track of these deceptions can become grueling for them. Making close connections might be difficult for those who lie often. If one wants to avoid this think about the long-term consequences. Think about your marriage or your solid friendship before lying. A short and simple apology may be a better option than lying.

Sometimes people lie to shift blame to someone else. “Its my husband’s decision, not mine,” or, “My colleague never told me you called.”
The ability to deal with life’s bigger problems can be diminished when someone starts lying habitually. If someone is afraid of taking responsibility for their actions and tend to place blame on others they may lose the art of fighting against hardships completely.
If you want to avoid this, figure out why you do it. For instance, are you afraid of responsibilities as you are too worried about what people will think about you? Once you realize the cause, you can work on it. Also, think about how other people feel when you place blame on them.

Sometimes people lie to avoid an uncomfortable position or discussion. “You’re doing a great job, but we can’t afford more than one accountant at this time.” Understand this may help you avoid the situation temporarily but its not a great help in the long run.
In order to avoid this make a list of all possible ways to handle the situation, if you think that truth will get you the desired result consider that as well.

People often do this for personal gain. If your caught in a lie its unlikely the other person will let it go easily. “I caught that bug going around so I won’t be coming to work today.”
Try to avoid this, one way is stop justifying yourself unnecessarily. If you think you’re entitled to a personal day there is no reason to justify that.

The most common example: “That dress looks fantastic on you.” Its perfectly alright to speak the truth. Put yourself in the other person’s shoes and think about it.

If you’re lying to make someone feel better stop and think how they would feel if they find out you were lying. Avoid this by being honest to others and to yourself.