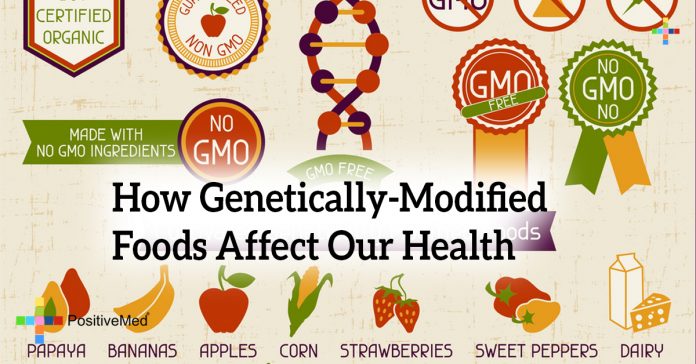 How Genetically-Modified Foods Affect Our Health

Foods produced from genetically-modified organisms, or crops, are known as GMO’s. Genetic engineering techniques have brought specific changes into the DNA of GMO’s. In this technique a non-specific but stable change is created by exposing organisms to radiation or chemicals.

The exact answer to this question is not known to anyone. Research on long-term effects on human beings is scarce as they have been on the market only since 1994. Studies where GMO’s are linked to altered metabolism, kidney and liver malfunction, inflammation, and reduced fertility have been done only on animals.

In one of these experiments genetically-modified soy was fed to multiple generations of hamsters, they lost the ability to produce offspring by the third generation.

One of the most important health dangers of genetically modified foods is that these foods cause inflammation all over the body. According to scientists, a diet loaded with junk food and GMOs, long term stress, lack of sleep, lack of exercise, smoking and an overall sedentary life-style, may cause chronic inflammation.

“Inflammation in your body is like taking a blowtorch to your to the organs of your body! Inflammation destroys the normal function of the body and leads to a slow, miserable death.”

Allergy sufferers worry that allergenic proteins will pop up in expected places as genes are transferred between plants. Although some scientists claims that sophisticated tests are run by the companies to ensure this kind of mistake does not happen, its always a gamble to insert new genes into a seed’s delicately constructed genome because all consequences cannot be predicted by science. This can result in creation of brand new allergens.

In spite of these health concerns supporters of GMOs claim there are a few benefits of GMO’s as well: GMO’s are known to reduce production costs as chemical and mechanical needs are reduced in planting, maintenance, and harvesting. Production of food that is more nutrient dense is made possible with the biotechnology of gene splicing as it allows for the opportunity of creating plants that produce such foods. Consider a product termed ‘Golden Rice.’ It contains beta-carotene, a source of vitamin A and iron. Most developing countries consume rice as a dietary staple. Childhood blindness and maternal anemia are at the highest rate in these countries. Vitamin A and iron can be effective in preventing and treating maternal anemia and blindness. In addition to health benefits, proponents of GMOs suggest that GMO’s can be a sustainable solution to malnutrition in developing countries and as a provision of a sufficient quantity of high-quality diet.

However the truth is that GMO farming doesn’t bring the costs down, it doesn’t reduce the pesticide consumption and it doesn’t solve the food crisis. In fact, we produce enough food in the world to feed all human beings, but the problem is in the distribution of the food.

As not enough scientific studies have been done to establish the hidden disadvantages of GMO’s there are many disputes which involve farmers, biotechnical companies, consumers, non-governmental organizations, government regulators, and scientists. On of the examples of these disputes is labeling of GMO products. We, as consumers, have the right to know what’s inside any food that we purchase and eat, but many companies inject millions of Dollars every year to fight food labeling and hide what they really use inside their products.